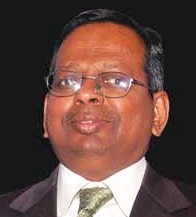 Senior officials were present as Ravishankar formally took over as Chief Secretary from Subhas Kumar who had sought voluntary retirement.

Kumar’s extended tenure as Chief Secretary was to end on October 31.

A 1980 batch IAS officer, Ravishankar occupied several key positions in Uttarakhand before being sent on deputation to New Delhi in 2007 from where he returned here recently.

Earlier, on the sidelines of a programme here Chief Minister Harish Rawat announced that he had cleared N Ravishankar’s name as the Chief Secretary and accepted Kumar’s request for voluntary retirement.

Kumar is being appointed as Chairman of the Uttarakhand Electricity Regulatory Commission.