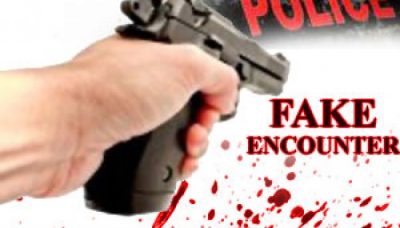 The National Human Rights Commission, NHRC has taken suo motu cognizance of media reports about the killing of an alleged gangster, Sumit Gurjar, in an encounter by police in Greater NOIDA, Gautam Budh Nagar, Uttar Pradesh on 3rd October, 2017. It has issued notices to the Chief Secretary and the Director General of Police, Uttar Pradesh and calling for a report in the matter within four weeks.

Reportedly, the family members of the deceased have alleged that he was killed in a staged encounter after police had picked up him from a market. They along with villagers protested against the police action near the mortuary at Sector- 94 of NOIDA and also blocked the traffic at Mahamaya Flyover for about 45 minutes.

The Commission has observed that the allegations leveled by the family members and the villagers, if true, raise serious issue of violation of human rights of the deceased and the aggrieved family. Elimination of a criminal in such an unlawful manner can never send a good message to a civilized society. As has been emphasized time and again, the police do not have a right to take away life of a human being. It is not the lawful way to deal with the criminals.

The Commission has already issued guidelines to deal with the matter relating to deaths in police encounter which have been circulated vide a letter dated 12th May, 2010 written by the Chairperson, NHRC to the Chief Ministers of all States and the Union Territories.

According to the media reports, the deceased Sumit Gurjar was wanted in a case of double murder and robbery. He had been taken into custody by the Noida police but no satisfactory answer was given by the police officers. It was only when the television broke the news that his family members came to know about his encounter.

Reportedly, the police authorities have denied the allegations of a fake encounter. The personnel of Kasna and Bisrakh police stations have claimed that the deceased was shot dead in an encounter in which his three accomplices managed to escape. According to the Senior Superintendent of Police, Gautam Budh Nagar, a fair investigation into the matter will be conducted.