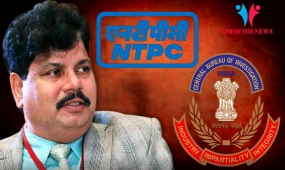 New Delhi, Dec 12 (IANS) The CBI on Monday said it has questioned the Director (Finance) of country’s largest energy conglomerate NTPC Ltd here in connection with an alleged Rs 5 lakh bribery case in which he demanded the money for his trip abroad.

Kulamani Biswal was questioned along with Umapathi Reddy, the father of another accused Rohit Reddy, Director of BGR Mining and Infra Pvt Ltd, at the Central Bureau of Investigation (CBI) headquarters in south Delhi’s Lodhi Road for over two days.

The CBI registered a case against Biswal and Reddy on December 7 under charges of criminal conspiracy, under the provisions of Prevention of Corruption Act and had also carried out searches at their residential premises.

Biswal, who is also part of the Board of Directors of NTPC, escaped before the CBI raided the place the bribe was to be given. Prabhat Kumar, an alleged confidant of Reddy, who was assigned to deliver the money to Biswal, was arrested with the money.

“Biswal allegedly demanded the amount to spend during his trip abroad,” a CBI official said.