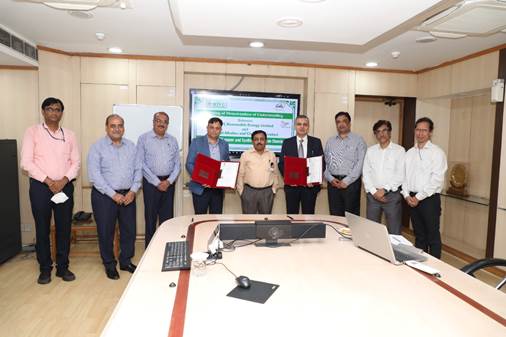 The MoU envisages collaborating in the field of Renewable Energy, Green Methanol & Green Ammonia and mutually exploring the opportunities for the supply of 100 MW RE-RTC (Round The Clock) power and synthesizing 75 TPD Green Methanol and 35 TPD Green Ammonia for captive use for the production of various chemicals by GACL at its Vadodara and Dahej complex in Gujarat.

NTPC Limited has been at the forefront of RE capacity development and has been credited for bringing the lowest ever solar tariff in the country. NTPC REL, a 100 % subsidiary of NTPC was incorporated in Oct’2020 to take care of the RE business of NTPC. This development comes in the backdrop of NTPC announcing its green hydrogen initiatives and plans to build the country’s first pilot projects for synthesizing green methanol, setting up green hydrogen filling stations, green hydrogen blending into PNG, and green energy storage project.

This would be the first commercial-scale Green ammonia and Green methanol project in the country and would align with the vision laid out by the Prime Minister for Atmanirbhar Bharat.

NTPC is India’s largest Power Utility and its core business is power generation with a total installed capacity of 69 GW (including JVs and subsidiaries). As part of increasing its renewable energy portfolio, a fully owned subsidiary has been formed on 7th October 2020 known as “NTPC Renewable Energy Limited” (NTPC REL) which shall take up Renewable Energy Parks and Projects including business in the area of Green Hydrogen, Energy Storage Technologies and Round the Clock RE Power.

Gujarat Alkalies and Chemicals Limited (GACL), incorporated in Mar 1973, is a state-owned chemical manufacturing unit. GACL is one of the largest producers of Caustic Soda in India, with a production capacity of over 1400 TPD at their two complexes in Dahej and Vadodara. GACL has its subsidiary company viz. GACL-NALCO Alkalies and Chemicals Pvt. Ltd. (GNAL) putting up an 800 TPD Caustic Soda Plant together with a 130 MW Thermal Power Plant (coal-based) at Dahej.