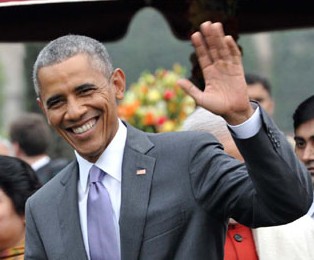 Riyadh, April 21  US President Barack Obama met on Wednesday with King Salman bin Abdulaziz in the Saudi capital of Riyadh ahead of a summit with leaders of the Gulf Cooperation Council (GCC) countries.

It is Obama’s fourth visit to the oil-rich Gulf nation since taking office in 2009.

The kingdom was seen as one of Washington’s most strategic allies in the Middle East, but bilateral relations were strained by the nuclear deal reached with Iran last year.

Hours before Obama met King Salman, US Defence Secretary Ashton Carter held talks with his Gulf Arab counterparts on military cooperation and the latest developments in the Middle East, including what were described as Iran’s destabilizing activities and the Islamic State terrorist group, said GCC Secretary General Abdullatif al-Zayani.

The GCC countries and the United States have agreed to carry out joint patrols to stop any Iranian arms shipments reaching Yemen, al-Zayani told a press conference.

The US defence chief urged the GCC members to be more engaged in helping the Iraqi government fight IS and to rebuild areas where the militants have been pushed out.

The White House said the US-GCC summit, scheduled for Thursday, will be an opportunity for leaders to discuss issues such as the fight against the IS group, regional conflicts, and sectarian tensions.

The summit comes on the heels of Obama’s criticism of Saudi Arabia’s regional role, which prompted a strong rebuke from the Saudi royal family.

In a recent interview with The Atlantic, Obama described Saudi Arabia and other allies as “free riders” on US foreign policy, and criticized what he saw as Riyadh’s funding of religious intolerance.

Almost a year ago, in May 2015, Obama hosted leaders of Gulf nations at the White House and the Camp David retreat, the first meeting of the Gulf countries after a framework agreement on limiting Iran’s nuclear programme.

Except for Kuwait and Qatar, top leaders from four of the six-member GCC countries were absent from the 2015 summit.