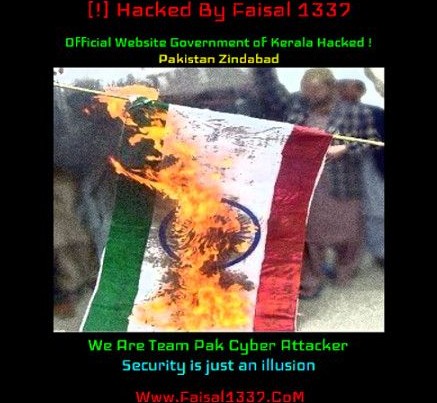 Thiruvananthapuram: The official website of the Kerala government (www.kerala.gov.in) was hacked late Saturday night, by a suspected pro-Pakistani group.

The hackers also posted a picture of India’s National Flag burning on the website along with a message – “Struck By Faisal 1337. Official Website Government of Kerala Hacked! Pakistan Zindabad. We Are Team Pak Cyber Attacker Security is just an illusion”.

With the cyber wing of the Kerala Police police launching a probe into the hacking, Chief Minister Oommen Chandy told reporters at his hometown Kottayam on Sunday that the hacking was a ‘grave issue’.

Cyber officials are trying to get the control of the website back. As of now, the website shows an ‘under maintenance’ message.

P.H. Kurian, principal secretary for IT and Industries, said that officials are inspecting the website.

The site is now being repaired by the state-owned Centre for Development of Imaging Technology which said the website server had not been hacked.