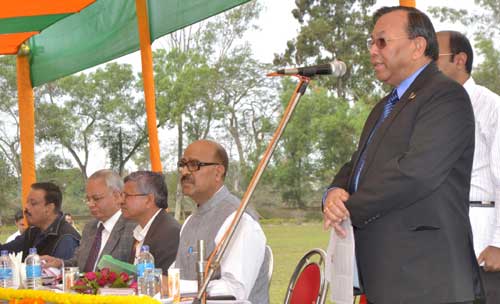 Nazira, March 12, 2012  A. K. Hazarika, Director-Onshore, ONGCL has formally inaugurated project “Amulya Dharohar”, which envisages conservation and beautification of the heritage sites of Ahom era located in Sivasagar District, during functions held at three heritage sites in Joysagar and Gargaon on March 10, 2012.

ONGC in association with ASI is undertaking this monumental project with a holistic view of conservation and beautification as well as to share benefits with the local people through exploitation of the vast tourism potentials of those architectural marvels of Ahom kingdom that lasted for 600 years.

Marks of ever ravaging Time are easily visible in these heritage sites, and ONGC as a responsible corporate citizen has taken the initiative of salvaging the priceless testimonies of bygone era by investing its valuable resources in them. Implementation of the project “Amulya Dharohar”  will cost Rs. 3.96 crores within a time frame of 36 months.

The project will be implemented in two phases. While the first phase will cost Rs. 2.38 Crore, the investment in the second phase will be to the tune of Rs. 1.58 Crore.

In the first phase, emphasis is being given on scientific measures for conservation these priceless heritage sites. Scientific clearance of buried structures and their documentation will be carried out at Talatal Ghar in Joysagar and  Kareng Ghar in Gargaon.

The holistic approach of the project is reflected not only in scientific measures for conservation of the four monuments viz. Talatal ghar, Rangghar, Kareng Ghar and group of four maidams in Charideo but also in it’s emphasis on development of tourist infrastructure like creating good facilities, laying down of pathways, visitor seating, signage, universal / handicapped access, route maps, lighting, electrical installations, security cover for the tourists.

The second phase of the project will also cover development of tourists’ amenities like improvement of visitors’ facilities along with protection of premises of monuments against encroachments and damage and risk and disaster management planning and implementation.

Along With development of tourist facilities, steps will also be taken to woo greater number of tourists through publication and awareness programmes in the second phase of the project itself.

True to the Egyptian saying “Man fears time but time fears Pyramids”, the Ahom era heritage sites in Sivasagar will surely be able to prove their posterity with the humble but invaluable magnanimity of ONGC.