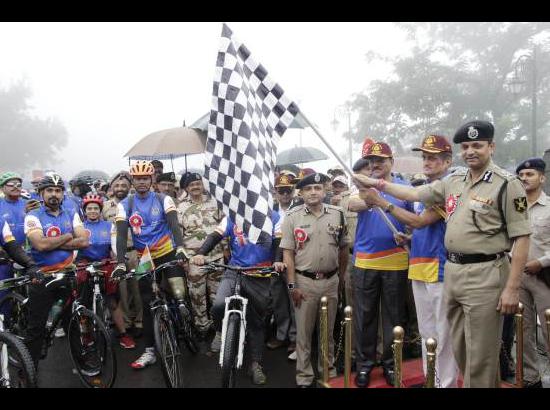 Ferozepur August 5, 2018: The Para-cycling expedition ‘’Infinity Ride – 2018’’ of BSF was flagged off today on 5th Aug 2018 from Ridge Maidan, Shimla by Shri S P Mardi, IPS, Director General (Police) Himachal Pradesh who was the chief guest for the occasion.

The event was hosted by Shri Kamal Nayan Choubey, IPS, Additional DG BSF Western Command, Chandigarh along with his team of Officers and assisted by Aditya Mehta Foundation, an NGO for the upliftment of Divyang (disabled) Para-athletes. The contingent consisted of 36 Nos of cyclists from BSF, and other CAPFs along with participants from Aditya Mehta Foundation. In addition to this, for the first time, the inclusion of BSF Mahila Praharis (ladies) exhibited inclusiveness and empowerment of women which in long run will act as the source of encouragement for others.

It was a delightful sight and experience for Shimla residents seeing BSF personnel amongst them as normal, these ‘’Seema Praharis’’ are deployed on the extremities of the border all along Pakistan and Bangladesh. The Force is reckoned for its deft handling of sensitive and volatile active borders & other security-related tasks, and it’s because of this professionalism and commitment that it is the most preferred and sought for Force by the Ministry of Home Affairs in regard to handling of various Internal Security duties and election duties in hypersensitive areas. At the same time, the confidence imposed by the Indian citizens in BSF is immense, which is attributable to the judicious firmness and compassionate selfless attitude of BSF personnel towards duty.

Since its inception in Dec 1965, BSF has fought two wars i.e 1971 War & Kargil War shoulder to shoulder with the Indian Army. Besides this, it is engaged in a ‘’no war no peace’’ situation with its hostile western neighbour, where ceasefire violations and hostilities are a regular norm. It is due to this, grit during operational employability that the Force has earned the name & fame as ‘’Nation’s First Line of Defence’’. However, this devotion towards National security hasn’t been without losses. But, the rich traditions and ethos of the Force are such that we honour the valour, sacrifice and martyrdom of our brave hearts in an enduringly dignified manner. On similar lines, the Divyangs (Disabled persons) of the Force are embraced with dignity by encompassing them, and empathetically restoring their self esteem in empowering them.

The 700 Kms (approx) route starting from Shimla onwards will pass through Narkanda – Rampur – Kalpa – Kaza – Chhatru and finally terminate at Manali on 15th Aug 2018. This stretch of route tests the limits of a fit human being, but the ability is not being only physically fit, the mental/psychological toughness plays an equal part. The cycle expedition team of Divyangs will exhibit the same grit and determination they had shown on the battlefield and prove the stuff they are made of while encountering the altitude and tough terrain of the stretch.

This event of Cycle Expedition is not the only event which BSF undertakes for Divyang empowerment. In this context, present Director General of Border Security Force, Shri. KK Sharma, IPS has been the source of encouragement and instrumental in converting these endeavours into a Policy. Thus, ‘’Divyang Skill Development Centre’’ (DSDC) came into existence on 1 Dec 2016 at BSF Campus Chhawla, New Delhi. This initiative was also in sync with Hon’ble Prime Minister of India’s National Wide campaign ‘’Accessible India campaign’’ (Sugamya Bharat Abhiyan) for achieving universal accessibility to persons with disabilities.

This series of Cycle Expeditions initially started with the association of Aditya Mehta Foundation in 2016 which was from Manali to Khardung La, and in 2017 from Bangalore to Hyderabad. In order to build this training expertise further, BSF has co-opted ‘’Aditya Mehta Foundation,’’ a body that helps to train athletes with disabilities to pursue sports. This is one of the initiatives in a series of efforts as Nation owes its responsibilities towards the members of the Force who sacrifice their lives and limbs during the course of duty in protecting the Nation.