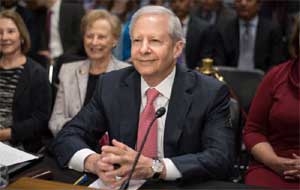 Affirming that the US has deep admiration for India’s history and rich culture, US Ambassador Kenneth I. Juster on Friday said people to people ties have provided a strong connect between the two countries.

“One of the key elements of the US-India relationship is our extensive people to people ties. These ties really form a foundation of our relationship and provide a very strong connection between our two countries,” Juster said inaugurating a community Durga puja marquee in the posh satellite township of Salt Lake here.

Refering to Benjamin Joy, who was in 1792 appointed the first American Consul to Kolkata – then the capital of India – Juster said since that time the US has “deeply admired India’s history and rich culture.

“I have always heard that Durga Puja is the grandest and most spectacular event of the year for Bengalis, looking around I now see that myself. I cannot imagine a better place to celebrate this rich Bengali tradition than in Kolkata, the epicentre of Durga Puja”.

Juster said that there are many Durga Puja celebrations in cities throughout the United States whether it is New York or Washington DC, Chicago, Houston, Los Angeles, San Francisco and many more.

The organisers of the Salt Lake ‘FD Block community Durga puja Marquee have come up with the concept of a ‘Dinosaur Park’ where the artists have made an installation representing a cave with caged dinosaur replicas, their unhatched and hatching eggs and so on. The interior of the cave resonates with uncanny sounds.

“I have always known that India had a rich cultural history but I learnt tonight that Dinosaurs began here as well, I have never seen so many,” Juster said in jest while appreciating the concept.

The organisers arranged for a special cultural dance performance for the inaugural event. Women residents decked up in traditional Bengali attire – white sarees with red border – danced to the tune of Dhaak (drums).

“I would like to thank the women residents of FD block for their outstanding and inspiring performance this evening. You are the true embodiment of the strength, courage and determination that is celebrated during this festival for the Goddess Durga and thank you for sharing this very special