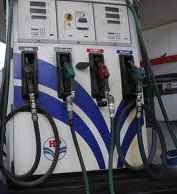 New Delhi: Petrol price was on Monday cut by Rs. 3.02 per litre, but diesel rates were hiked by Rs. 1.47 a litre — the second increase this month in line with global trends.

A litre of diesel, however, will cost Rs. 46.43 a litre as compared to Rs. 44.96 per litre, according to Indian Oil Corp (IOC), the nation’s largest fuel retailer.

This is the 7th straight reduction in price of petrol.

Petrol price was last cut on February 18 by 32 paisa a litre.

On diesel, this is the second increase in rate this month. The price was hiked by 28 paisa a litre last time.

Prior to that revision, fuel rates were revised on February 1 when petrol price was cut by a marginal 4 paise a litre and diesel by 3 paise a litre after the government raised excise duty to take away most of the benefit arising from fall in international oil prices.

The government had raised excise duty on petrol by Re 1 a litre and that on diesel by Rs 1.50 to mop up additional Rs. 3,200 crore during the remainder of the current fiscal.

This was the fifth hike in excise duty since November that cumulatively gave the government Rs. 17,000 crore in additional revenue. The five levy hikes total to Rs. 4.02 per litre on petrol and Rs. 6.97 on diesel.

State-owned fuel retailers IOC, Bharat Petroleum Corp (BPCL) and Hindustan Petroleum Corp Ltd (HPCL) revise rates of the fuel on 1st and 16th of every month based on average oil price and foreign exchange rate in the preceding fortnight.

The revision was due on February 16 but the retailers chose to defer it by a couple of days.

“The movement of prices in the international oil market and Rupee-USD exchange rate shall continue to be monitored closely and developing trends of the market will be reflected in future price changes,” IOC added. Courtesy: PTI