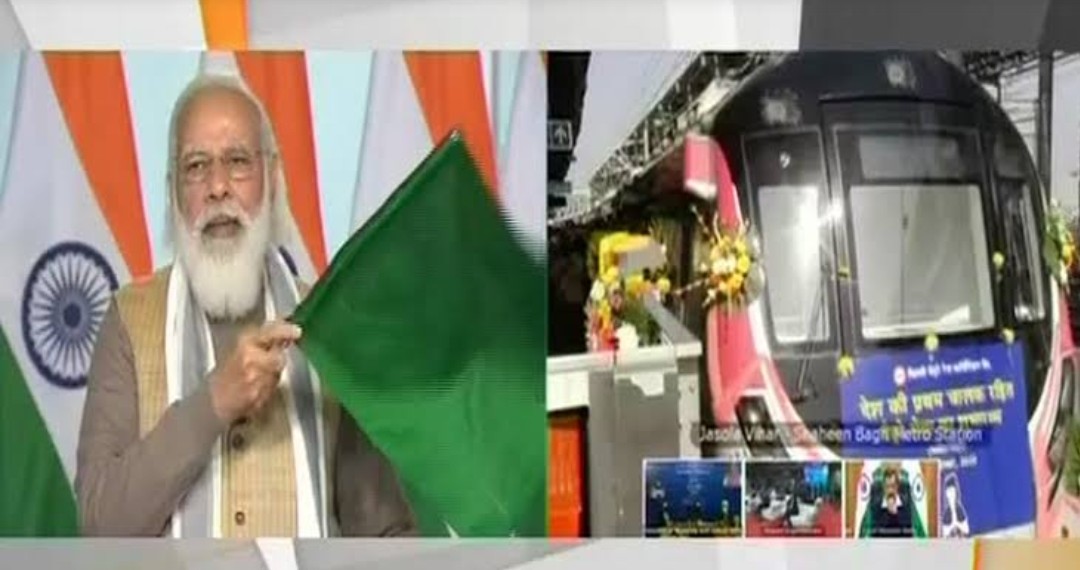 Urbanization should not be seen as a challenge but used as an opportunity to build better infrastructure in the country and enhance Ease of Living : PMWork is being carried out on different types of metro – RRTS, MetoLite, MetroNeo and Water Metro : PM

Lists out instances of integration of services in various areas

Speaking on the occasion, the Prime Minister termed today’s event as an attempt to make urban development future ready. He said preparing the country for future needs is an important responsibility of governance. He lamented the fact that a few decades ago, when the demand of urbanisation was felt, there was not much attention given to the needs of the future, half-hearted work was done and confusion persisted. He said unlike this, modern thinking says that urbanization should not be seen as a challenge but used as an opportunity to build better infrastructure in the country, an opportunity through which we can enhance Ease of Living. He said this difference of thinking is seen now in every dimension of urbanization. He added that in 2014, only 5 cities had metro rail and today, metro rail is available in 18 cities. By the year 2025, we are going to expand it to more than 25 cities. In 2014, only 248 km of metro lines were operational in the country and today it is about three times, more than 700 kilometers. By the year 2025, we are trying to expand it to 1700 km. He stressed that these are not just figures, they are proof of ease of living in the lives of crores of Indians. These are not just infrastructures made of brick and stone, concrete and iron, but are evidence of the fulfillment of the aspirations of the citizens of the country, the middle class of the country.

The Prime Minister remarked that the government formulated the metro policy for the first time and implemented it with an all-round strategy. Emphasis was on working according to local demand, promoting local standards, Make in India expansion and use of modern technology. He said it was noted that the expansion of the metro, modern modes of transport should be used according to the needs of the people of the city and the professional lifestyle there. This is the reason why work is being done on different types of metro rail in different cities.

The Prime Minister listed different types of metro rail on which work is being carried out. On the Regional Rapid Transit System (RRTS) between Delhi and Meerut, the Prime Minister said it will reduce the distance of Delhi and Meerut to less than an hour. He said in cities where passenger numbers are less, work is being done on the MetroLite version. MetroLite version would be constructed at 40 percent cost of normal metro. He further added that Metro Neo is being worked in cities where the ridership is less. It would be built at the cost of 25 percent of the normal metro. Similarly, water metro would be an out of the box thinking. For cities where there are large water bodies, the water metro is now being worked on. This will provide last mile connectivity to the people near the islands.

The Prime Minister said the metro today is no longer just a medium of public transport but a great way to reduce pollution. Thousands of vehicles have been reduced from the road due to the metro network, which used to cause pollution and jam.

The Prime Minister said for the expansion of metro services, Make in India is important. Make in India reduces costs, saves foreign exchange, and gives more employment to people in the country itself. He stressed that standardization of rolling stock has reduced the cost of every coach from 12 crores to 8 crores now. Today, four big companies are manufacturing metro coaches in the country and dozens of companies are engaged in the manufacture of metro components. This is helping Make in India as well as the campaign for self-reliant India.

The Prime Minister said with the achievement of Metro Rail without a driver, our country has joined the select countries of the world where such facilities are available. He said a braking system in which 50 percent of the energy goes back into the grid when the brakes are applied are being used. Today 130 MW of solar power is being used in metro rail, which will be increased to 600 MW.

Talking about the Common Mobility Card, the Prime Minister said that  providing the same standards and facilities for modernization is very important. The Common Mobility Card at the national level is a major step in this direction. This one card will give integrated access to the commuters wherever they travel, whichever public transport they take.

Taking the example of the Common Mobility Card, the Prime Minister dwelled on the process of consolidating all the systems. Through such consolidation of systems, the strength of the country is being harnessed in a more coordinated and efficient way.  “Like One Nation, One Mobility Card, our government has done many things in the past years to integrate the systems of the country,” Shri Modi said.

One Nation, One Fastag has made travel seamless on highways across the country. This has saved commuters from jam and delays. One Nation, One Tax i.e. GST has ended the complications in the tax system and has brought uniformity in indirect tax system.  One Nation, One Power Grid, is ensuring adequate and continuous power availability in every part of the country. Power loss is reduced.

With One Nation, One Gas Grid, Seamless Gas Connectivity is being ensured of the parts where gas-based life and economy used to be a dream earlier. One Nation, One Health Insurance Scheme i.e. Ayushman Bharat through which millions of people from India are taking advantage anywhere in the country. Citizens moving from one place to another  have got freedom from the trouble of making new ration cards through One Nation, One Ration Card, Similarly, the country is moving in the direction of One Nation, One Agriculture Market due to new agricultural reforms and arrangements like e-NAM.