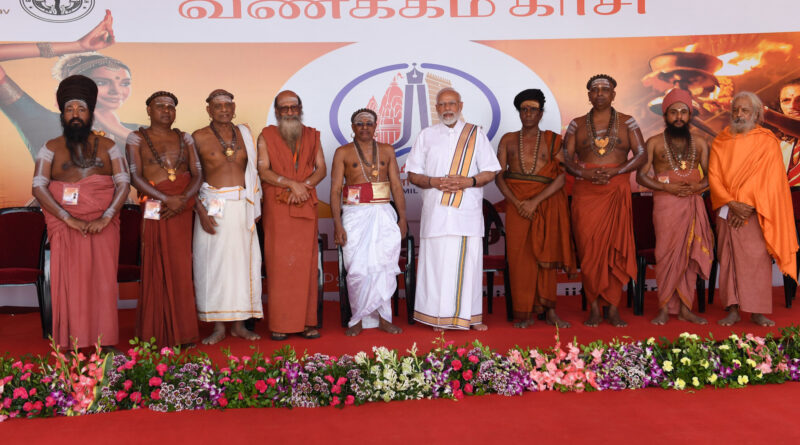 PM inaugurates ‘Kashi Tamil Sangamam’ in Varanasi, Uttar Pradesh
“Embracing entire India, Kashi is the cultural capital of India whereas Tamil Nadu and Tamil culture is the centre of India’s antiquity and glory”

“In AmritKaal, our resolutions will be fulfilled by the unity of the whole country”

The Prime Minister, Shri NarendraModi inaugurated ‘Kashi Tamil Sangamam’ – a month-long programme being organised in Varanasi, Uttar Pradesh today. The objective of the programme is to celebrate, reaffirm and rediscover the age-old links between Tamil Nadu and Kashi – two of the country’s most important and ancient seats of learning. More than 2500 delegates from Tamil Nadu will be visiting Kashi. During the programme, the Prime Minister also released a book ‘Tirukkural’ along with its translation into 13 languages. He also witnessed a cultural programme followed by aarti.

Addressing the gathering, the Prime Minister expressed delight upon the gathering being held in the most ancient living city in the world. Speaking on the importance of Sangams in the country, be it the confluence of rivers, ideology, science or knowledge, the Prime Minister said that every confluence of culture and traditions is celebrated and revered in India. He remarked that in reality, it is a celebration of India’s might and characteristics, thus making the Kashi-Tamil Sangam unique.

Throwing light on the connection between Kashi and Tamil Nadu, the Prime Minister said that on one hand, Kashi is the cultural capital of India whereas Tamil Nadu and Tamil culture is the centre of India’s antiquity and pride. Drawing an analogy to the confluence of the Ganga and Yamuna rivers, the Prime Minister said the Kashi-Tamil Sangam is equally holy which engulfs endless opportunities and strength in itself. The Prime Minister congratulated the Ministry of Education and the Government of Uttar Pradesh for this momentous gathering and thanked central universities like IIT, Madras and BHU for extending their support to the programme. The Prime Minister especially thanked the students and scholars of Kashi and Tamil Nadu.

Throwing light on the rich culture and traditions of India, the Prime Minister said that both these places are marked as the birthplace and workplace of India’s finest acharyas. He underlined that one can experience similar energies in Kashi and Tamil Nadu. He said, “Even today the relevance of KashiYatra comes up during the traditional Tamil marriage procession.” He underlined that unending love for Kashi from Tamil Nadu signifies the feeling of Ek Bharat Shrestha Bharat which was the way of life of our ancestors.

The Prime Minister underlined Tamil Nadu’s contribution to the development of Kashi and recalled that Tamil Nadu-born Dr SarvapalliRadhakrishnan was the Vice Chancellor of BHU. He also mentioned the Vedic scholar RajeshwarShastri who lived in Kashi even though he had his roots in Tamil Nadu. He said that the people of Kashi also miss PattaviramShastri who lived on Hanuman Ghat in Kashi. The Prime Minister informed about the KashiKaamKoteshwarPanchayatanMandir which is a Tamilian temple on the banks of HarishchandraGhat, and the two-hundred-year-old Kumarswamy Matt and Markande Ashram on KedarGhat. He also stated that many people from Tamil Nadu have been living near the banks of KedarGhat and Hanuman Ghat, and have made immense contributions towards Kashi for several generations. The Prime Minister also mentioned the great poet and revolutionary, Shri SubramaniaBharathi who hailed from Tamil Nadu but lived in Kashi for many years. He informed about BHU’s pride and privilege in establishing the chair dedicated to Subramania Bharati.

The Prime Minister underlined that the Kashi-Tamil Sangam is taking place during the AzadiKaAmritKaal. He said, “In AmritKaal, our resolutions will be fulfilled by the unity of the whole country.” He stated that India is a nation which has lived a natural cultural unity for thousands of years. Throwing light on the tradition of remembering 12 Jyotirlingas after waking up in the morning, the Prime Minister said that we start our day by remembering the spiritual unity of the country. Shri Modi also lamented the lack of efforts to strengthen this tradition and heritage of thousands of years. He further added that Kashi-Tamil Sangamam will become a platform for this resolution today while making us realise our duties, and being a source of energy to strengthen national unity.

The Prime Minister said that it was through this attitude of breaking language and surpassing the intellectual distance that Swami Kumargurupar came to Kashi and made it his Karmbhoomi and got KedareshwarMandir constructed in Kashi. Later, his disciples got KashiVishwanath temple constructed in Thanjavur on the banks of river Kaveri. The Prime Minister reiterated the link between Tamil scholars and Kashi by mentioning personalities like ManonmaniyamSundaranar who wrote a Tamil State song and the connection of his guru with Kashi. The Prime Minister also remembered the role of Ramayana and Mahabharata written by Raja ji in connecting the North and the South. “This is my experience that without understanding scholars from South India like Ramanujacharya, Shankaracharya, Raja Ji to SarvapalliRadhakrishnan, we simply can not understand Indian philosophy”, Shri Modi said.

Referring to ‘PanchPran’, the Prime Minister said that a country with a rich heritage should be proud of its legacy. He said despite having one of the world’s oldest living languages, i.e. Tamil, we lack in honouring it fully. “This is the responsibility of 130 crore Indians to preserve the legacy of Tamil and enrich it. If we ignore Tamil we do a great disservice to the nation and if we keep Tamil confined in restrictions we will do great harm to it. We have to remember to remove linguistic differences and establish emotional unity”, the Prime Minister said.

The Prime Minister said that the Sangamam is a matter of experiencing more than the words and expressed the hope that people of Kashi will leave no stone unturned in providing memorable hospitality. The Prime Minister expressed the wish that such events are organised in Tamil Nadu and other Southern states and youngsters from other parts of the county visit and absorb the culture there. The gains of this Sangamam need to be taken forward through research and this seed should become a giant tree, the Prime Minister concluded.

Uttar Pradesh Chief Minister Shri. Yogi Adityanath while delivering his address said that Kashi Tamil Sangamam organized under the guidance of  Prime Minister Shri NarendraModi with an aim to preserve and enrich the glorious heritage of philosophy, culture and literature of North and South India in the spirit of “Ek Bharat, Shreshtha Bharat”.

Speaking on occasion Dr. L. Murugan said that Tamil Nadu and Kashi have an incalculable bond over the years and the culture and tradition of Tamil Nadu is being reflected in Uttar Pradesh,  he also said Kashi Tamil Sangamam is being held in the holy land of Varanasi is to realize the ‘Ek Bharat Shreshtha Bharat’ dream of MahakaviBharathiar.

After his pilgrimage visit to Varanasi, the Pandiyan king Athiveera Rama Pandian built a large temple at Tenkasi in Tamil Nadu.  Similarly, he said that the relationship between Kasi and Tamil Nadu can be seen in KasiKandam. Pointing out the spiritual connection between Kasi and Rameswaram, the Minister said that the culture and tradition of Tamil Nadu is reflected in Uttar Pradesh and this ceremony is being held in a way that reflects it.

In his address at the inaugural ceremony, noted singer and Member of Parliament Mr.Ilaiyaraaja referred to the age-old ties between Kashi and Tamil.

The promotion of the idea of ‘Ek Bharat Shreshtha Bharat’ has been one of the major focus areas of the government guided by the vision of the Prime Minister. In yet another initiative reflecting this vision, ‘Kashi Tamil Sangamam’, a month-long programme, is being organised in Kashi (Varanasi).

The objective of the programme is to celebrate, reaffirm and rediscover the age-old links between Tamil Nadu and Kashi – two of the country’s most important and ancient seats of learning. The programme aims to provide an opportunity for people from all walks of life including scholars, students, philosophers, traders, artisans, artists etc. from the two regions to come together, share their knowledge, culture and best practices and learn from each others’ experiences. More than 2500 delegates from Tamil Nadu will be visiting Kashi. They will participate in seminars, site visits etc to interact with local people of similar trade, profession and interest. A month-long exhibition of handlooms, handicrafts, ODOP products, books, documentaries, cuisine, art forms, history, tourist places etc of the two regions will also be put up in Kashi.

The endeavor is in sync with NEP 2020’s emphasis on integrating the wealth of Indian Knowledge Systems with modern systems of knowledge. IIT Madras and BHU are the two implementing agencies for the programme.

The month-long event will bring together academic exchanges, seminars, discussions, etc. between experts and scholars on various aspects of these two ancient expressions of Indian culture, with focus on bringing forward the relationship and shared values between the kashi and Tamil Nadu.