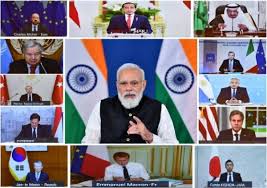 Prime Minister Shri Narendra Modi participated virtually in the G20 Extraordinary Summit on Afghanistan earlier today. The Meeting was convened by Italy, which currently holds the G20 Presidency, and chaired by Italian Prime Minister Mr. Mario Draghi. Issues under consideration at the meeting related to the humanitarian situation; concerns relating to terrorism; and human rights in Afghanistan.

The Prime Minister noted that the Afghan people have a great feeling of friendship for India. He conveyed that every Indian feels the pain of Afghan people facing hunger and malnutrition. He emphasized the need for the international community to ensure that Afghanistan has immediate and unhindered access to humanitarian assistance.

In order to preserve the socio-economic gains of the last 20 years and to restrict the spread of radical ideology, the Prime Minister called for an inclusive administration in Afghanistan, which includes women and minorities. He conveyed support for the important role of the United Nations in Afghanistan and called for renewed support of the G20 for the message contained in UN Security Council Resolution 2593 on Afghanistan. The Prime Minister called on the international community to forge a unified international response without which it would be difficult to bring about the desired change in Afghanistan’s situation.