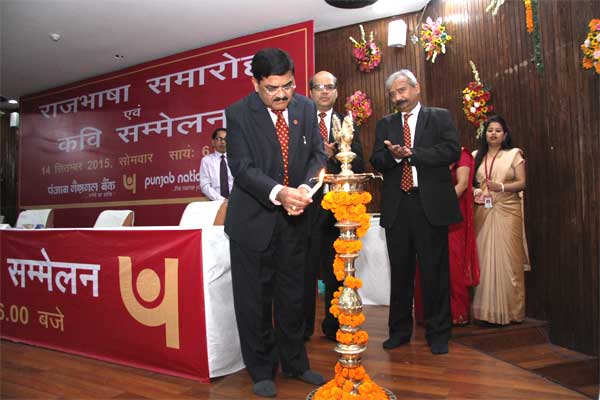 New Delhi: On 14h September, 2015 Punjab National Bank organised Rajbhasha Samaroh. The function was presided over by Sh. Gauri Shankar, Executive Director of the Bank. In his address  Executive Director said that use of Hindi in Banking is not only a statutory requirement but also a business need. Providing customer services in the language of the people not only strengthens the relationship of the bank with the customers but also increases the business of the Bank.  He also informed that  K.V. Brahmaji Rao received today the prestigious  award of  “Rajbhasha Kirti” “First Prize”on Hindi Diwas from the Honourble President of India  Shri Pranab Mukherjee.

At this occasion Sh. H K Rai, General Manager welcomed guests and honoured the staff for excellent work in implementation of official language in Bank during 2014-15 under Lala Lajpat Rai Rajbhasha Shield Yojna. Individual staff members were also awarded for various Hindi competitions. Other Senior Executives, General Managers and Bank employees were present on the occasion.