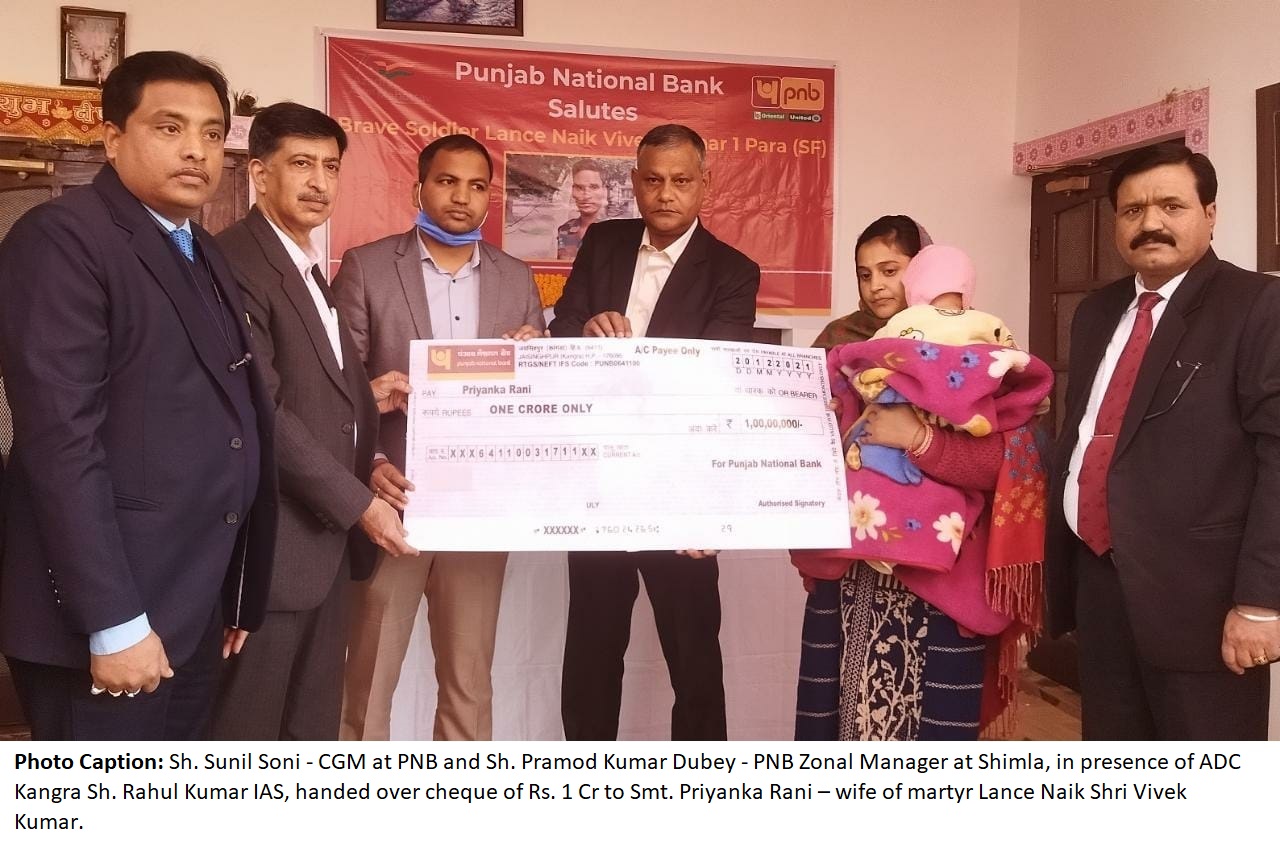 PNB pays tribute to the martyrs of Coonoor helicopter crash

The Bank has expeditiously settled the insurance claims on its own, amounting to Rs 1 crore each, for the families of two defence personnel who lost their lives in the tragic helicopter crash

Delhi, December 20, 2021: Punjab National Bank (PNB) has expressed gratitude and solidarity towards the defence personnel who lost their lives in the tragic Coonoor helicopter crash. The Bank has proactively settled the insurance claim to the families of Para Commando Lance Naik Shri Vivek Kumar and Para Commando Lance Naik Shri B Sai Teja, amounting to Rs 1 crore each.

Para Commando Lance Naik Shri Vivek Kumar started his military career in December 2012, was from Jaisinghpur, a small town in Himachal Pradesh. He was part of a special force in 1 PARA SF and served in Jammu and Kashmir, both south and north Kashmir.

Para Commando Lance Naik Shri B Sai Teja started his military career in June 2013 as a soldier of the Army Service Corps and later adorned the maroon beret and Balidan Badge in May 2019.

PNB senior management and the bank employees condoled the demise of the Chief of Defense Staff (CDS) General Shri Bipin Rawat, his wife Madhulika Rawat, and all 11 great warriors martyred in the helicopter crash. They paid floral tribute and observed two minutes of silence for the peace of the departed souls.

Two of the eleven martyrs were covered under the ‘PNB Rakshak Salary’ scheme, whose claims were promptly settled without delay by handing over cheques to the nominees, personally by the PNB officials. The ‘PNB Rakshak Salary’ account covers all defense personnel, police and paramilitary personnel with a personal accident cover upto Rs. 60 lakhs, air accident cover of Rs. 1 crore and other complete benefits packages.

PNB has been working on several CSR initiatives reaffirming its commitment towards the defense personnel, police and paramilitary personnel. The Bank has made numerous contributions in the past to help the dependents of brave martyrs, veterans, and their families.