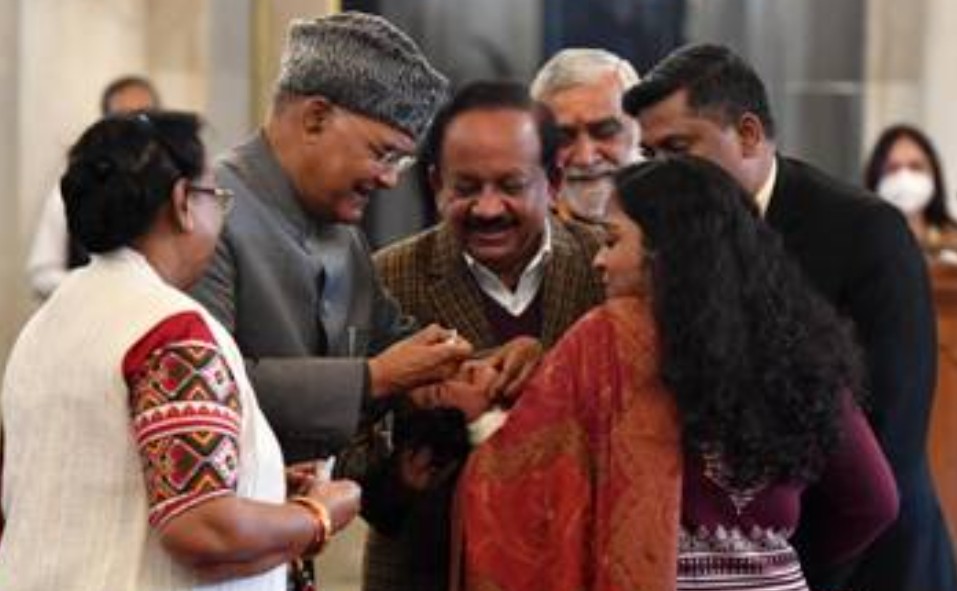 A decade of being Polio Free; Last case in 2011- Dr. Harsh Vardhan

The Hon. President and First Lady Smt. Savita Kovind administered polio drops to children on the eve of the Polio National Immunization Day, which is observed on the 31st January 2021 (Sunday), also popularly known as Polio Ravivar. Around 17 crore children of less than 5 years of age will be given polio drops as part of the drive of Government of India to sustain polio free status of the country. The countrywide drive will be supported by about 24 lakh volunteers, 1.5 lakh supervisors and many Civil Society Organisations (CSOs), WHO, UNICEF, Rotary etc. Healthcare workers will be visiting as many as 2 crore households to ensure that no child is left without the protection of the polio vaccine.

Speaking at the launch event, Dr. Harsh Vardhan expressed deep gratitude towards the President and the First Lady for their kind presence, particularly at the time of COVID pandemic to highlight India’s commitment to protect all the children of India from all vaccine preventable diseases.

He reminisced his personal journey of leading the fight against Polio as the Health Minister, Delhi Government when India accounted for 60% of all Polio cases globally.  “The strategy of Pulse Polio Immunization Programme was conceived in December 1993 and it was rolled out from 2nd October, 1994 when the first child was immunized against Polio as part of this programme. Almost 12 lakh children were immunized in a single day at around 4000 centres. In 1995 seeing the visible impact of the Pulse Polio Programme in Delhi, this was replicated at the national level. A year later, several countries of South East Asia region of WHO emulated the strategy and implemented similar programs. Even in Africa, Mr. Nelson Mandela launched ‘Kick Polio out of Africa’ campaign”, the Union Health Minister recollected.

Cherishing the success of the program, Dr. Harsh Vardhan said, “Before the start of the program, India had 60% caseload of Polio worldwide. With the last case of Polio reported in Howrah on 13th January, 2011, the country has been free of Polio for a decade now.”

The Union Health Minister applauding India’s accomplishments along with the precautionary measures that should hence be taken said, “‘Polio-free certification’ of the entire South-East Asia Region of WHO including India on the 27th of March 2014 was a huge accomplishment in the history of India and Global Public Health. However, we need to remain vigilant and maintain the population immunity against polio with sensitive surveillance till global polio eradication happens. We all know that poliovirus is still circulating in other parts of the world including our neighbouring countries which may re-infect us. Pakistan and Afghanistan of the Eastern Mediterranean Region of WHO are still reporting Polio cases.”

He pointed out that under the leadership of Prime Minister Shri Narendra Modi, Universal Immunization Programme is focusing to protect children from more diseases than ever before and has introduced several new vaccines like Pneumococcal Conjugate Vaccine, Rotavirus vaccine, and Measles-Rubella vaccine in the recent past. “To provide additional protection to our children, Government of India has also introduced the injectable Inactivated Polio Vaccine into its routine immunization program,” he added.

Detailing on the mitigation measures that the government has taken, he noted the efforts in strengthening routine immunization:“While we are making efforts to protect our children from more and more diseases, it is important that all vaccines under the programme reach every last child of our country. The lessons learnt from polio programme are being implemented to strengthen routine immunization by carrying out Mission Indradhanush, Gram Swaraj Abhiyan, Extended Gram Swaraj Abhiyan and Intensified Mission Indradhanush I and II– a drive toward 90% full immunization coverage of India by year 2018 and to sustain it thereafter. In order to close gaps that might have emerged during the COVID-19 pandemic, another phase of Intensified Mission Indradhanush (IMI 3.0) has been planned in 250 high risk districts of the country during February and March 2021. In addition to this, guidance for conduction of Sub-National Immunization days for polio and sensitive surveillance of vaccine preventable diseases during pandemic has also been issued to States.”

The Health Minister also appreciated the efforts of State Governments and the supporting organizations like WHO, UNICEF and Rotary International etc., for strengthening the efforts of the Government not only for polio programme but also for other initiatives in immunization. He also applauded the efforts of the thousands of volunteers, frontline workers, and health officials across the states for their tireless efforts in keeping the country polio-free. “My deepest gratitude to all those mothers who have brought and will bring their children to the Polio Booths for vaccination. I also thank all those country men and women who have contributed in any way to the success of this programme”, Dr Harsh Vardhan stated.