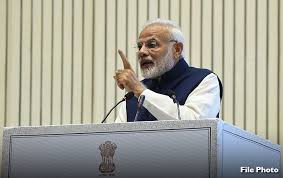 Prime Minister, Shri Narendra Modi will visit Varanasi and Ghazipur in Uttar Pradesh on 29th December, 2018. During the visit, he will dedicate the 6th International Rice Research Institute South Asia Regional Centre (ISARC) campus to the nation  in Varanasi and  attend the One District, One Product Regional Summit at Deendayal Hastakala Sankul in Varanasi. A commemorative postal stamp on the Maharaja Suheldeo will be released by the Prime Minister in Ghazipur where he will also address a public rally..

The Prime Minister will dedicate to the nation – International Rice Research Institute (IRRI), South Asia Regional Center (ISARC) at campus of National Seed Research and Training Center (NSRTC) in Varanasi. It will serve as a hub for rice research and training in South Asia and SAARC region. The first international Center in the eastern India is expected to  play a major role in harnessing and sustaining rice production in the region.

India’s association with IRRI dates back to 1960s,and Prime Minister Narendra Modi was the first Indian PM to visit IRRI headquarters in Manila,  Philippines in November 2017, where he discussed agricultural innovations and research advances for the rice sector.

Shri Modi will attend the One District, One Product Regional Summit at Deendayal Hastakala Sankul (Trade Facilitation Centre & Crafts Museum) in Varanasi. ‘One District One Product’ scheme is aimed at enhancing the skills of local people and increasing the reach of the  indigenous trades, crafts and products from small towns and small districts in the state. These include handicrafts, food processing, engineering goods, carpets, readymade clothes, leather goods etc which not only earn foreign exchange but also provide employment to the people.