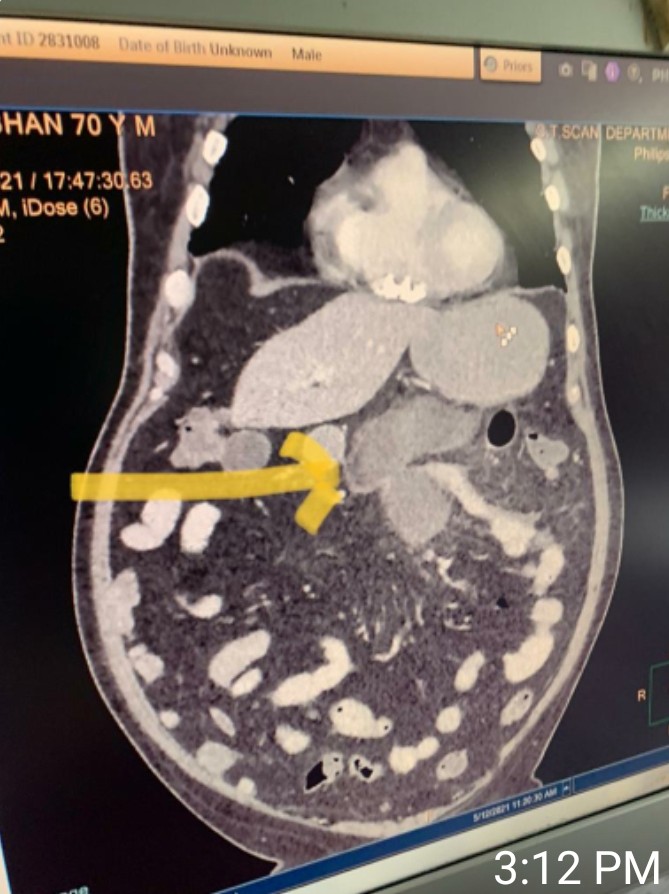 Mr Kumar (56 year old) resident of Delhi, lost his 3 of his family members including his wife due to COVID. He had barely completed the last rites of his wife when he experienced pain in his abdomen. He had been tested positive for COVID along with his wife and had been experiencing mild covid symptoms initially. His abdominal pain was considered gastritis/ stress related and self medication for acidity was taken which delayed proper treatment by 3 days. He was finally evaluated in COVID emergency of Sir Ganga Ram Hospital by Dr Ushast Dhir, senior consultant in department of Surgical Gastroenterology and Liver Transplantation
. The CT scan revealed his small intestine (jejunum) had perforated. His COVID disease also had worsened by now requiring ventilator support. The patient was admitted and taken up urgently for surgery. According to Dr Dhir ,”Ulceration of Jejunam (First part of Small Intestine) in the patient raised my suspicion of fungal disease and patient was immediately started on antifungal treatment . We sent the portion of removed intestine for Biopsy.”

The family of Mr Ijaz, 68 year old was cheered up to know that their father had recovered from COVID. But he started having mild abdominal pain. He was a diabetic and had received steroids for treatment of COVID. The patient had no associated fever and pain was very mild. His clinical examination also did not show any signs of intestinal perforation.

Butt,high index of suspicion lead Dr Piyush Ranjan, senior consultant of Medical Gastroenterology at Sir Ganga Ram Hospital New Delhi, to get an urgent CT for the patient. The CT scan revealed small intestinal perforation similar to the first one. The biopsy confirmed our worst fear of Mucormycosis of small intestine in both patients . Both these patients had COVID and had diabetes but only one of them had received steroids. Both these patients were operated by Dr Ushast Dhir, who revealed that these patient had similar intra- operative findings where first part of small intestine(jejunum) had outpouchings called diverticula and these diverticula had perforated along with surrounding ulceration. Mucormycosis most commonly involves Rhino-orbital-cerebral system or the lungs.Intestinal or GI mucormycosis is very rare disease and most commonly involves stomach or large intestine.

These patients in majority are immune-compromised. Majority of gastro-intestinal mucormycosis is seen in organ transplant recipients. The cases treated at Sir ganga ram hospital were unique as as they had covid and small intestine (instead of stomach /colon)was involved in both. GI mucormycosis is rare and the patient presents with vague abdominal symptoms. In recent times history of COVID exposure along with treatment with steroids should warrant an early CT scan of abdomen.