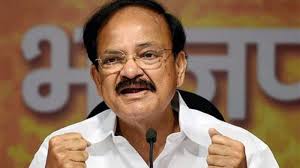 VP calls for extensive documentation and a database of Indian folklore

‘Folklore is people’s literature, cannot be separated from rural India’

The Vice President, Shri M. Venkaiah Naidu today called for reviving Indian folklore traditions and utilising their potential to advocate social causes such as preventing gender discrimination and protection of the girl child.

Expressing his concern over the gradual decline in the popularity of various traditional folk forms, he said that communities that once practised folk art forms are vanishing. He suggested skilling and training of the youth from these families to revive them and wanted the youth to use folk media as tools of advocacy and social change.

Shri Naidu also stressed the need to develop a rich database of folklore traditions of our country. “Extensive documentation must be done by using audio-visual media while taking care not to lose their essence in the process of translation to a modern format”, he added.

Virtually addressing an event celebrating Indian folklore traditions, the Vice President highlighted the great history and rich diversity of folk art and oral traditions in India and called for popularising them.  “The nuances of our language, the totality of our traditional practices and the collective wisdom of our ancestors, flow organically into folklore. Folklore traditions were also critical in bringing political and social awareness to our masses during the struggle for independence. Folklore is, in the true sense, people’s literature”, Shri Naidu said.

Noting how folklore in India has thrived in history largely due to the patronage it enjoyed in rural areas, the Vice President said that ‘rural India and folklore cannot be separated’. Our civilizational values and cultural traditions are embedded in our rural life, he added.

Calling folklore the most important carrier of our culture, Shri Naidu expressed concern over the erosion of oral traditions which are finding it difficult to remain relevant due to a lack of patronage.

He cited pervasive globalization and a commercialized mass media that caters to mainstream art forms as possible reasons for their decline. He urged protection of these traditions because these ‘cultural roots, once permanently lost, cannot be recovered”, he reminded.

In order to revive folklore and enlighten the younger generations, the Vice President suggested that annual events, especially in schools and colleges should lay emphasis on local and folk art forms. He observed that mass media, such as cinema, TV, and radio could also incorporate aspects of our folklore in their format suitably and reach out to their audiences.

Shri Naidu advised leveraging online and digital platforms as well to revive and propagate our folk art forms. He also called upon public broadcasters like Doordarshan and All India Radio to give importance to folk arts in their programmes.

On this occasion, the Vice President complimented the Government of Karnataka for having established Karnataka Folklore University, also known as Karnataka Janapada Vishwavidyalaya, dedicated exclusively for study and research on folklore. “It fills a vital need to create much-needed awareness of our folk forms”, he said.

The Vice President expressed his appreciation for the artists who performed recently in the cultural programmes organized by the state cultural department and the district collector of Ballari in his honour. In particular, he complimented the folk songs performed by 15-year-old Meera of Hospet and the Karnataka folk dance by Shri Satyanarayana and his troupe.