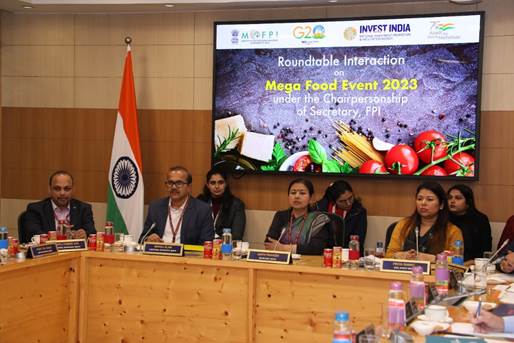 Roundtable of Secretary, FPI, Smt. Anita Praveen with Embassies and High Commissions in India on the activities related to the Mega Food Event 2023

Secretary, FPI in her keynote address highlighted that Ministry of Food Processing Industries is organizing a Mega Food Event from 3rd to 5th November 2023, which is being envisaged on a much larger scale than the event earlier organized by the Ministry in 2017. She stated that the event wouldcater to all subsegments of food processing and allied sectors. In addition to this, the event will also focus on promoting millets and millet-based value-added products as 2023 has been declared as the ‘International Year of Millets’. Secretary, FPI further added that through the event the Ministry envisages to showcase India as a global food supply hub.

Representatives from all countries were requested to share their input and suggestions on the proposed structure of the event tomake it comprehensiveand inclusive for all relevant stakeholders globally. Participants were also requested to create awareness about the event amongst senior policy makers, agri-food companies, academia etc. in their respective countries andactively participateas a Partnerto make the event a grand success.

All participants ensured their support to the Ministry with the plannedactivities as a precursor to the Mega Food Event as well aswith the final event in November 2023.Some of the suggestions / feedback given by the participants included inviting financial institutions tothe event, specific focus on the research &development segment, food safety & securityetc. All representatives from the Foreign Missions also congratulated the Ministry on its progress for the Mega Food Event. They assured to inform their respective Ministries, business chambers, agri-food and allied industries companiesfor ensuring maximum participation from their respective regions.

Further, the Investment Facilitation Cell (Invest India) was directed to connect with all the participants to share further information about the mega event as well as explore areas of collaborations.