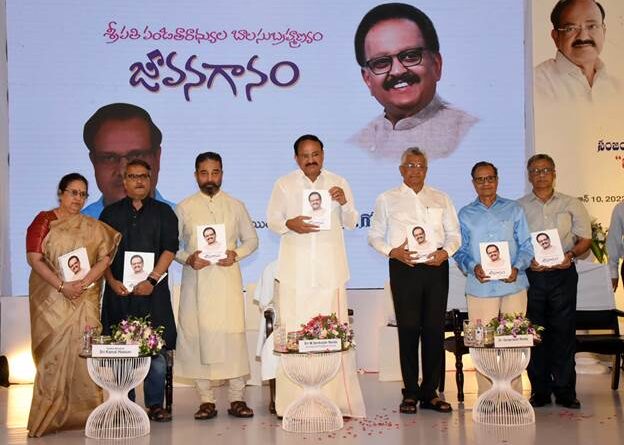 S P Balasubramanyam was an embodiment of Indian values and culture: Vice President

Youth should take the lead in protecting and promoting Indian culture, heritage and languages

The Vice President, Shri M Venkaiah Naidu today paid glowing tributes to the late Shri S P Balasubramanyam saying that he not only ruled the tinsel world with his melodious voice but was also an embodiment of the Indian values and culture. He will always remain an inspiration to everyone, particularly the younger generation.

Releasing a documentary and a book on the life of the legendary playback singer in Hyderabad today, Shri Naidu, who had a close association with him for many years, said that ensuring and guiding the future generations to be wedded to Indian culture and customs would be a real tribute to him.

Vice President during the release of a book and a documentary on legendary singer  SP Balasubramnyam in Hyderabad today.

The Vice President handed over the first copy of the book to well-known actor, Shri Kamal Haasan. The Vice President complimented the documentary-maker, Shri Sanjay Kishore and the author of the book, Shri P S Gopalakrishna. He also lauded Shri Vara Prasad Reddy for promoting the publication of Telugu books and protecting and promoting arts and culture.

Shri Naidu said that Shri Balasubramnyam had not only brought global recognition to Telugu film songs but strove relentlessly to inspire the younger generation in upholding and promoting Indian culture and Telugu language.

Observing that the late singer was a multi-faceted personality, he said that apart from becoming a famous playback singer, he also was a music director, film director and actor and inspired thousands of youngsters by showing his affection and lending words of encouragement through his highly popular television programmes.

Shri Balasubramian was a highly cultured and humble person with a friendly disposition. The qualities he possessed earned him respect and esteem from everyone. Describing the period of the playback singer in Telugu cinema as a ‘golden era, the Vice President, said that artistes like him remain immortal through their work.

Emphasizing the importance of inheriting values, customs and traditions from parents, Shri Naidu recalled the vital role played by the playback singer’s father, Shri Sambamurthy in shaping his personality. Despite his phenomenal rise in the film world, Shri Balasubramaniam always remained an epitome of simplicity and humility.

The Vice President also lauded the gesture of the late singer in converting the family’s ancestral house in Nellore District, Andhra Pradesh into a Vedic school in memory of his father.

Observing that the Indian culture, music, films and fine arts play a huge role in projecting India as a soft power, Shri Naidu emphasized the need to protect and promote India’s culture, traditions and languages and called upon the youth to take the lead in this regard.