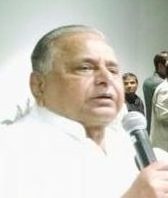 The Samajwadi Party moved towards a likely split on Friday as a combative supremo Mulayam Singh expelled his son Uttar Pradesh Chief Minister Akhilesh Yadav from the party for six years. SP national general secretary Ramgopal Yadav was also sacked for siding with the CM.

The tough action was necessary to save the party, the supremo said here as he announced the major decision that will have ramifications on the upcoming UP Assembly elections. Akhilesh was sacked for “gross indiscipline” a day after he released a parallel list of more than 200 candidates in contradiction to the 325 nominees announces by his father formally.

Earlier on Friday, Mulayam had issued show-cause notices to the two leaders asking why disciplinary action should not be taken against them. “Your issuance of a list parallel to that of the national president is gross indiscipline,”  read Mulayam’s notice to his son.