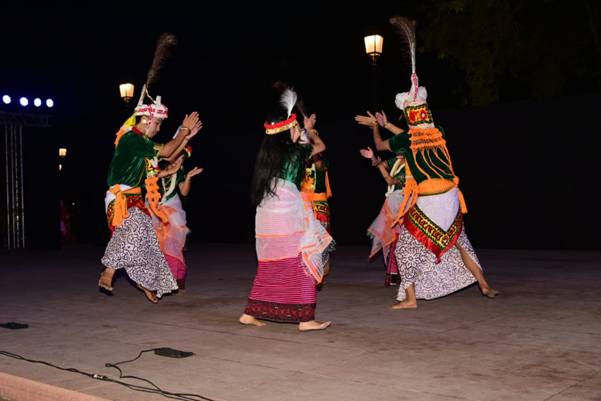 The Chenda Melam was performed by Delhi Panchavadya Trust.Panchari Melam is a percussion ensemble, performed during temple festivals in Kerala, India. Panchari Melam (or simply panchari), is one of the major forms of Chenda Melam (ethnic drum ensemble), and is the best-known and most popular in the kshetramvadyam (temple percussion) genre. Panchari Melam, comprising instruments like Chenda, Ilathalam& base chenda ( valanthala) is performed during many temple festivals in central Kerala, where it is presented in arguably the most classical manner. Panchari is also traditionally performed, albeit with a touch of subtle regional difference, in north Kerala (Malabar) and south-central Kerala (Kochi).

Kathak Dance was performed by Students of Kalaashish. They presented Om Namah Shivaya in raag bhopali, teentaal followed by a tarana originally choreographed by Pt. Vijai Shankar on drutteentaal, raag jansanmohini. The present presentation is choreographed by Asavari Pawar.

All visitors are welcome to attend these events for free and witness the emerging picture of new India.