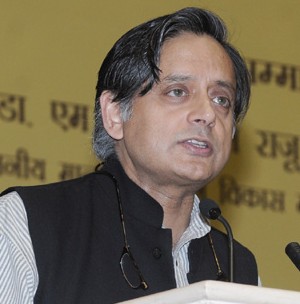 New Delhi: Dismissing speculation that he was trying to get close to the BJP as “ridiculous”,Congress leader Shashi Tharoor  today said those demanding that he be punished for allegedly praising Narendra Modi have neither understood his remarks, nor bothered to talk to him.

Amid controversy over Modi’s invitation to him for “Swachh Bharat” campaign, to which he responded positively leading to an outcry from Congress’s Kerala unit, Tharoor said, “the fact is that we don’t do nuance in our politics”.

“Nobody understands when somebody is trying to express a complex set of ideas,” he said and underlined he has been seen by some as a “foreign object in the body politic”.

“And perhaps there is a difficulty in digesting who I am and how I conduct myself,” he told NDTV when asked about the controversy.

Signalling that disciplinary action would be contemplated against Tharoor if he kept on lauding Modi’s initiatives, KPCC Vice President M M Hassan said in Thiruvananthapuram, “As a first step, we are asking him to stop praising Modi as his stance went totally against the Congress’ ideals.”

Tharoor said that he is different from those who have devoted their entire life to politics, served the nation, served the party.

“I have indeed had a different career. I have come into politics late in my life and as a professional and perhaps there are some incompatibilities that have manifested these reactions,” he said.

Tharoor has maintained that his response to Modi’s call to support the “Swachh Bharat” campaign would not mean that he even remotely endorsed the BJP’s “core Hindutva” agenda and that he continued to be a “proud Congressman”.

“It is completely ridiculous. I reject it completely,” Tharoor said when asked about talks in some sections within his party and outside that Tharoor was trying to get close to the BJP.

Tharoor said that the amusing thing is that everybody who has been seen on Kerala television has his number.

“(They have) called me on various matters in the past and could have easily called me again but they choose to go public…” he said.

Meanwhile, Tharoor tweeted saying Mahatma Gandhi stood not only for physical cleanliness but for cleanliness of mind, heart, soul and spirit.

“I therefore urge @PMOIndia to also work for an India cleansed of bigotry, hatred, intolerance& divisiveness,an India that is truly clean,” he said.  Courtesy-Agencies (PTI)