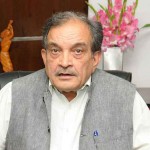 Ministry of Steel is organising a Conclave on “Capital goods in Steel sector: Manufacture in India” in Bhubaneswar, Odisha, on 23rd October 2018. Briefing media persons in New Delhi, today Union Steel Minister, Chaudhary Birender Singh, said that this Conclave is an initiative of Ministry of Steel to promote domestic capacity and capability building and manufacturing of capital goods in the steel sector. It is being organized with support of MECON and CII. The objective is to transform India into a world class manufacturing hub through massive collaborative efforts with best-in-class institutes and industry around the world.

The steel consumption in the country has been increasing at 7.9% since last two years. As per World Steel Association’s 8 month steel production figures for 2018, India has become the second largest steel producer in the world. Indian steel production has been growing at 6.7%, achieving highest growth amongst the major economies of the world.

Through multilateral collaborative efforts by way of MoUs, Joint Ventures, Transfer of Technology and tie-ups, manufacturing base is being widened to make India global manufacturing hub where most of the capital goods equipment could be manufactured within the country.

Apart from the inaugural session, the one-day Conclave, will have two panel discussions on “Synergising global experience and domestic capital goods capability for the steel sector” and “Incentivising domestic capacity expansion” in which leaders of the steel industry, policy makers and experts from abroad will discuss core issues, challenges and government support required for steel industry in India.

The Conclave will see the participation of five Union Ministers, the Chief Minister of Odisha, Secretaries of Steel Ministry, Department of Heavy Industry and senior officials of Central & Odisha Government. There will also be a huge presence of Indian Capital Goods (CG) manufacturers and steel manufacturers.

Around 350 delegates and a representative from World Steel Association (WSA) and 28 CEOs of foreign technology companies will participate in the Conclave.