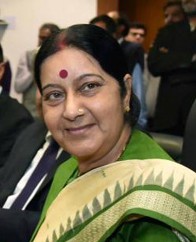 I was watching  Sushma Swaraj Ji on TV LIVE when was clearing her stand on helping Lalit Modi.

What i could observe was that it was a very impactful emotional speech which was well prepared to clear the air on the controversy surrounding her help to Lait Modi attain visa.

Every dialogue which was delivered by Sushma ji was well audible as there was silence in the house and the applauds did also follow when she gave her clarification which was a touch of emotions.

Making a statement in the Lok Sabha in the absence of opposition Congress MPs on Thursday, Swaraj said Lalit Modi’s wife Minal was suffering from life-threatening cancer and that she wanted her husband to be near her at an hospital in Portugal.

She said “If it was Sonia ji in my place what would she have done? Left her to die?” Swaraj asked.

She read from doctors’ testimonies to show that Modi’s wife was going through a particularly critical phase of her treatment.

“If I am guilty of helping a woman in need, I am ready to accept it,” she said.