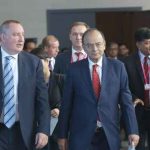 Current News
October 18, 2018 sarkarimirror Current news india today, First india, First india today, First website on india news, India news first, India news top, india news websites, India number one, India today first news, India today in bureaucracy, India top websites, taxpayers, Taxpayers encouragement, Top in i dia, Top in india, Top websites on india news
New Delhi ,
There appears to be misgiving about the last date for taking Input Tax Credit (ITC) in relation to invoices or debit notes relating to such invoices pertaining to period from July, 2017 to March, 2018. Such uncertainty seems to stem from the Government’s decision to extend the last date for furnishing of details of outward supplies in FORM GSTR-1 from time to time.According to Section 16 (4) of the CGST Act, 2017, a registered person shall not be entitled to take ITC in respect of any invoice or debit note for supply of goods or services or both after the due date of furnishing of the return under Section 39 for the month of September following the end of financial year to which such invoice or invoice relating to such Debit Note pertains (hereinafter referred to as “the said invoices”) or furnishing of the relevant Annual Return, whichever is earlier.

With taxpayers self-assessing and availing ITC through return in FORM GSTR-3B, the last date for availing ITC in relation to the said invoices issued by the corresponding supplier(s) during the period from July, 2017 to March, 2018 is the last date for the filing of such return for the month of September, 2018 i.e. 20th October, 2018.

It is clarified that the furnishing of outward details in FORM GSTR-1 by the corresponding supplier(s) and the facility to view the same in FORM GSTR-2A by the recipient is in the nature of taxpayer facilitation and does not impact the ability of the taxpayer to avail ITC on self-assessment basis in consonance with the provisions of Section 16 of the Act. The apprehension that ITC can be availed only on the basis of reconciliation between FORM GSTR-2A and FORM GSTR-3B conducted before the due date for filing of return in FORM GSTR-3B for the month of September, 2018 is unfounded as the same exercise can be done thereafter also.

It may, however, be noted that the Government has extended the last date for furnishing of return in FORM GSTR-3B for the month of September, 2018 for certain taxpayers who have been recently migrated from erstwhile tax regime to GST  regime vide Notification No. 47/2018- Central Tax dated 10th September, 2018. For such taxpayers, the extended date i.e. 31st December, 2018 or the date of filing of Annual Return whichever is earlier will be the last date for availing ITC in relation to the said invoices issued by the corresponding suppliers during the period from July, 2017 to March, 2018.

All the taxpayers are encouraged to take note of the legal requirements and be compliance savvy.