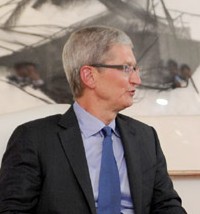 It will be available in four colours including sleek rose gold colour, the company announced during its special “spring lineup” at the packed auditorium at its Cupertino, California-based headquarters.

The iPhone SE will be available in 100 countries including India by the end of May and will go on full sale on March 31.

The smartphone is a mix between the iPhone 5 and iPhone 6 generations of devices with size and design of iPhone 5S and the specs and capabilities of the iPhone 6S. Apple said the iPhone SE “the most powerful 4-inch smartphone ever”.

As powerful as iPhone 6S, the device will have a 64-bit A9 processor and M9 motion co-processor. That means it can play games just as brilliantly as Apple’s current flagship, plus it supports hands-free “Hey Siri” prompting.

The camera is also carried over from the 6S – it is the same 12-megapixel iSight camera with a true tone flash. With its new image signal processor it has the ability to shoot Panorama up to 63MP, 4K video (1080p up to 60 fps) and slo-mo up to 240 fps.

The phone is claimed to have an improved battery life, Bluetooth 4.2 and new microphones.

Compared to the iPhone 5S that precedes the new SE at the 4-inch size, Apple’s new smartphone has 50 percent faster LTE than 5S, faster Wi-Fi (802.11ac) and the significant addition of Apple Pay support.

The device supports Voice over LTE (VoLTE) and Wi-Fi calling and runs on the newly-launched iOS version 9.3.

The new iOS 9.3 operating system includes a night mode that reduces blue light and automatically shifts colours to the warmer end of the spectrum at night helping the user sleep better.

“Many, many customers have asked for this,” said Apple CEO Tim Cook during Apple’s launch event. “And I think they’re going to love it.”

Apple also launched a new lightweight 9.7-inch iPad Pro which is touted as 40 percent less reflective than an iPad Air 2.

It also features a new technology called “True Tone Display”, which measures the color temperature of ambient light and adjusts the display to match. Like the iPhone SE, the Pro also takes advantage of iOS 9.3′s new blue-light reduction feature for late-night use.

It is powered by the A9X processor and has a similar four-speaker system. Apple said it is twice as loud as the Air 2. The new tablet is compatible with the Pencil stylus introduced last year.

Other accessories include a new Lightning-powered SD card reader and USB camera adapter.

For pictures, the new iPad Pro steps up to a 12-megapixel rear camera, complete with focus pixels, dual-tone flash, and Live Photos.

In addition to announcing the 9.7-inch iPad Pro, Apple also revealed a new smaller version of the Smart Keyboard accessory for the device.

The new iPad Pro will be available in four colours – space grey, silver, gold, and rose gold – and three size capacties, ranging from 32GB on up to 256GB.

The company displayed a new space black version of the milanese loop, new colours for the sport and leather bands and a new woven nylon band. The new nylon band features a “four layer construction” and will come in seven different colours.

Earlier during the event, Apple CEO Tim Cook, referring to the ongoing battle with the US government over encryption to unlock an iPhone used by an attacker in a mass shooting in San Bernadino last year, reiterated the company’s commitment to protect its users’ data and privacy.

“We have a responsibility to help you protect your data and your privacy. We will not shrink from this responsibility,” Cook told the gathering, taking a dig at the Federal Bureau of Investigation (FBI).

“We built the iPhone for you, our customers, and for many of us it is a deeply personal device,” he added.

The company also revealed that it fully runs on renewable energy in 23 countries.

According to the Telegraph live coverage, Apple has built a machine called Liam that can deconstruct an iPhone into its components to recover high quality materials and reintroduce them into the supply chain.

“For example, the silver from the motherboard can be used in solar panels. Eventually, Apple wants to recycle the parts into new iPhones,” Lisa Jackson, Apple’s vice president of environment, policy and social initiatives, said at the event.

“Take your old product into an Apple store or visit its website and post it to the company,” she added.

Apple is expected to appear in a federal court in California on March 22 to fight the order and has accused the US Department of Justice of trying to “smear” the company with “desperate” and “unsubstantiated” claims.

The US government has been fighting Apple over access to information on the iPhone used by one of the San Bernardino killers, Rizwan Farook, in December.

Apple says the demands violate the company’s rights and has argued that the government is asking for a “back door” that could be exploited by the government and criminals.