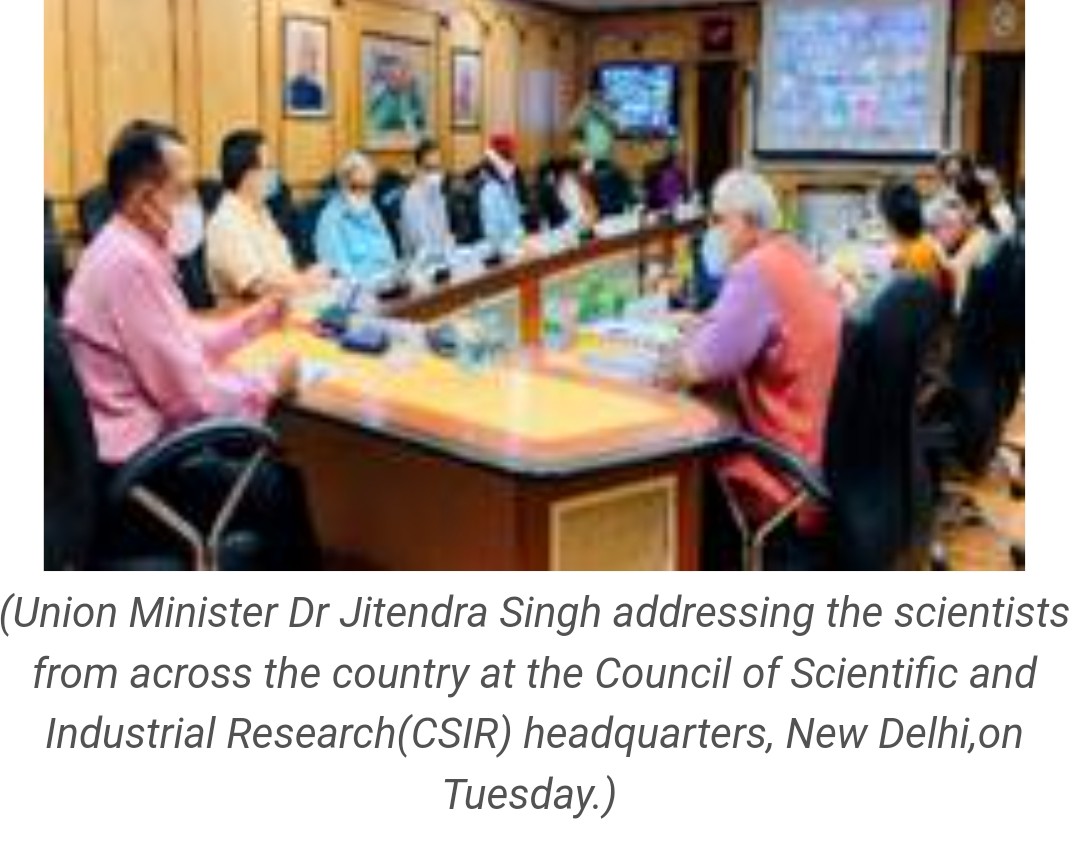 Technology Meant for Mitigation of Airborne Transmission of SARS-COV-2 will be Installed in Parliament House says Union Minister Dr.Jitendra Singh

Union Minister of State (Independent Charge) Science & Technology; Minister of State (Independent Charge) Earth Sciences; MoS PMO, Personnel, Public Grievances, Pensions, Atomic Energy and Space, Dr Jitendra Singh today discussed with scientific experts, the modalities of installing the latest UV-C Disinfection Technology in the Parliament House, on the eve of the upcoming session on the 19th of this month. The technology has been developed by the Council of Scientific & Industrial Research (CSIR), affiliated to the Union Ministry of Science & Technology.

The Minister later informed that, to begin with, the technology meant for mitigation of airborne transmission of SARS-COV-2 will be installed in the Central Hall, Lok Sabha Chamber and Committee Rooms 62 and 63.

However, Dr Jitendra Singh cautioned that even after installation of this disinfection technology, everybody is advised to strictly adhere to COVID appropriate behaviour including use of Face Mask, maintaining social distance, avoiding crowds etc.

CSIR-CSIO has developed an UV-C air duct disinfection system. The disinfection system can be used in auditoriums, large conference rooms, class-rooms, malls etc. which provides a relatively safer environment for indoor activities in the current pandemic. It can also be used in buildings, transport vehicles, etc.

The technology has been developed according to the requirements for deactivation of SARS COV-2 virus contained in an aerosol with necessary ventilation measures, necessary safety and user guidelines and tested Bio-safety standards etc. UV-C deactivates viruses, bacteria, fungus and other bio – aerosols etc. with appropriate dosages using 254nm UV light. Use of UV-C may also help in ameliorating the fungal infections being witnessed during the current wave of the pandemic.

Addressing a semi- virtual conference of scientists from across the country at the CSIR Headquarters here today Dr.Jitendra Singh said that inter-ministerial formal arrangements for better coordination is needed to further step up efficiency of different departments. Pointing out that the Prime Minister is particularly keen about this initiative, the Minister urged the officials to explore the feasibility for the same without delay.

The Minister commented on the legacy of CSIR in scientific pursuit and urged the scientists to highlight the role played by the organisation in different segments of the day-to-day life of the common man. CSIR enjoys a unique status globally in the field of science and technology, he added.

Urging the CSIR to preserve and showcase its achievements over the decades Dr.Jitendra Singh said that the feasibility of setting up a museum in the national capital needs to be explored.

Earlier, welcoming the Minister to the virtual conference Director General, CSIR & Secretary, DSIR Dr.Shekhar  C Mande informed the Minister about the structure and functions of CSIR and the innovative research initiatives underway in different units across the country.  Besides senior functionaries of CSIR Headquarters, top scientists of 37 CSIR laboratories and five units spread across the country participated in the virtual conference.

(Union Minister Dr Jitendra Singh addressing the scientists from across the country at the Council of Scientific and Industrial Research(CSIR) headquarters, New Delhi,on Tuesday.)