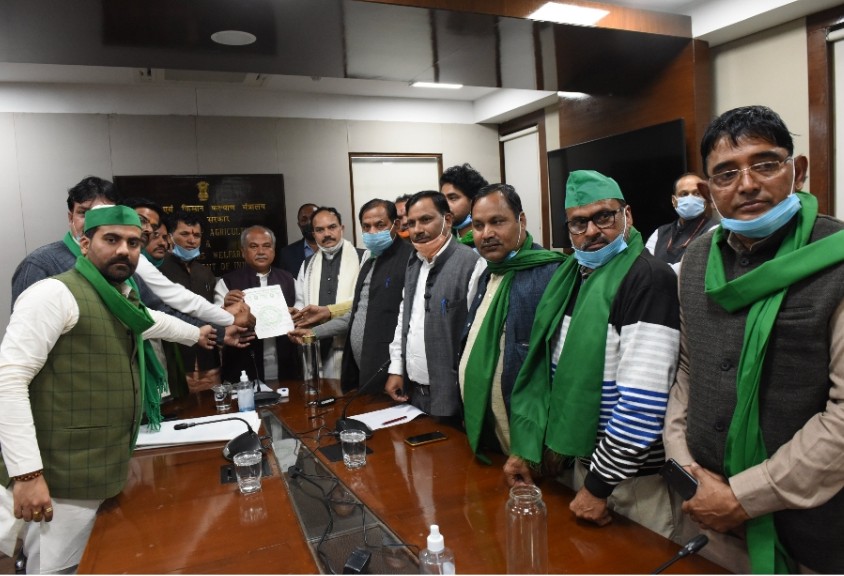 Bharatiya Kisan Union (Kisan) from UP supports the Farm Acts

Members of the Bharatiya Kisan Union (Kisan) from Uttar Pradesh met the Union Minister for Agriculture and Farmers Welfare, Shri Narendra Singh Tomar, at Krishi Bhavan today. The leaders of the Union welcomed the Farm Acts and said that the Acts will be beneficial for farmers. However, they submitted a memorandum to the Minister with suggestions regarding the Farm Acts and Minimum Support Price (MSP).

Agriculture Minister Shri Narendra Singh Tomar thanked the Union leaders for coming out in support of the Farm Acts. The Minister said that the Farm Acts have been welcomed in various States across the country. He further added that the Government is willing to continue dialogue with genuine farm unions and is willing to find a solution with an open mind. He said that MSP is an administrative decision and will continue as it is.

TheBharatiya Kisan Union (Kisan) leaders suggested that farmers be given the option of going to Civil Courts in case of a dispute. They alsosuggested that the Panchayat head should be accorded the same importance as the head of the mandi to safeguard the rights of the farmers in small towns and villages. In case of the Essential Commodities Act, they suggested thatit should prevent hoarding and black marketing.

The Union leaders also suggested that electricity rates for irrigation should be reduced and electricity should be available for longer hours in the State of Uttar Pradesh. They also proposed thatstandards for crops should be decided at the procurement centres so that farmers do not face any problem in selling the produce.