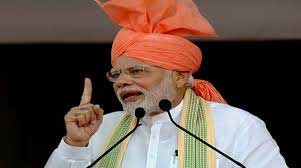 Churu (Rajasthan), Feb 26  In his first remarks after Indian Air Force (IAF) planes struck the Jaish-e-Mohammad’s (JeM) biggest terror training camp in Pakistan’s Balakot on Tuesday, Prime Minister Narendra Modi vowed that he will always defend the nation and not allow it to bow.

Addressing a public meeting here, Modi said: “I want to assure the people of the country that the nation is in safe hands.”

He also said that today the mood of the people looks different.

The Prime Minister said: “Nothing is more important than the nation. And I salute the people who are serving the nation.”

His remarks came hours after the IAF struck the JeM’s biggest training camp at Balakot in Pakistan.

Earlier in the day, Pakistan admitted that the IAF planes struck Balakot but claimed that they returned when it scrambled its