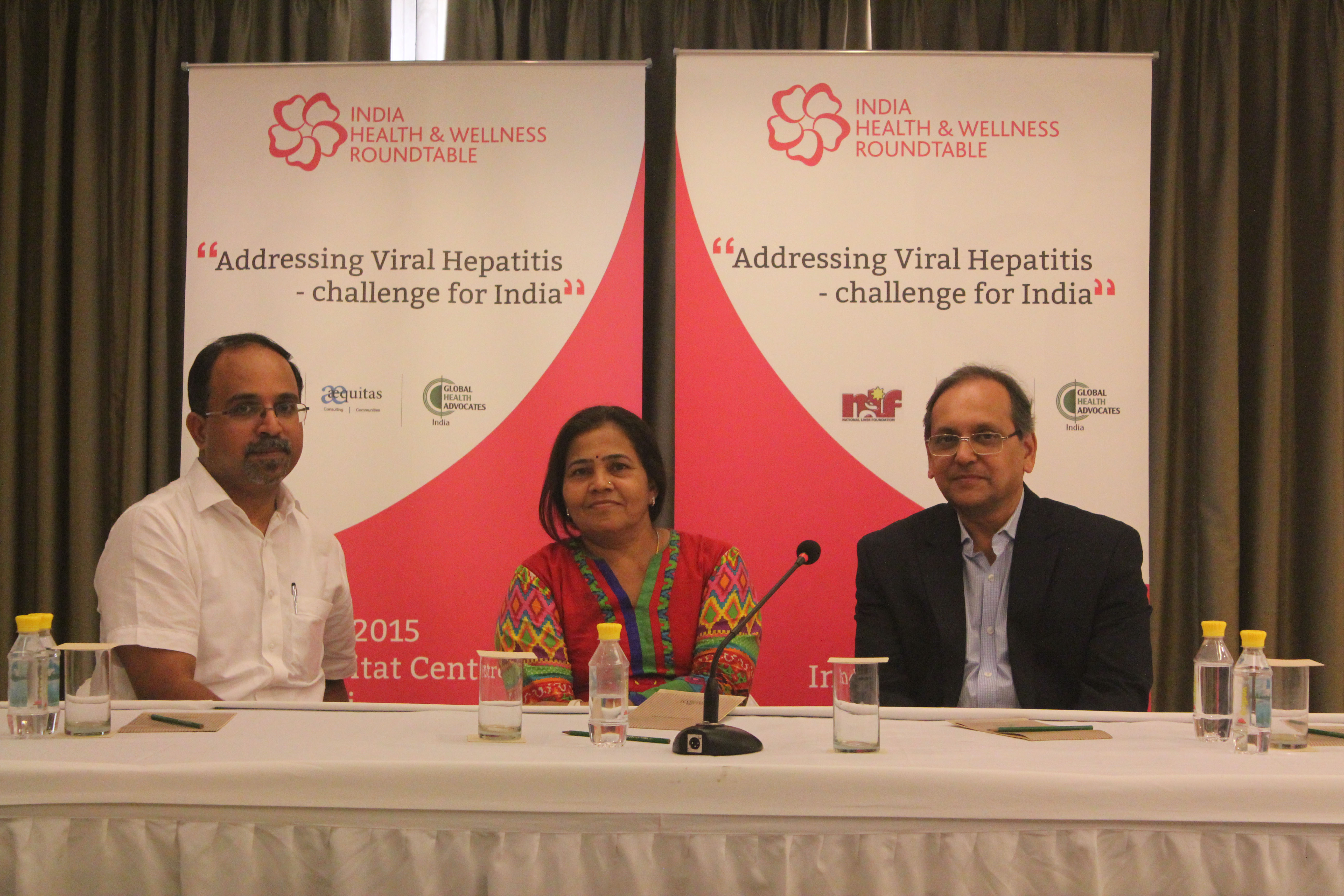 Health & Fitness
July 29, 2015July 29, 2015 sarkarimirror 2015: The National Liver Foundation and its partners held a discussion and media round-table on Viral Hepatitis B & C in India at the India Habitat Center, Addressing Viral Hepatitis – A Challenge for India which is unacknowledged and uncounted July 28, New Delhi yesterday

July 28, 2015: The National Liver Foundation and its partners held a discussion and media round-table on Viral Hepatitis B & C in India at the India Habitat Center, New Delhi yesterday, a day before World Hepatitis Day (July 28th) to focus global attention on the looming Hepatitis Epidemic which is a “Silent Killer”. Hepatitis B virus is known to be 50-100 times more infectious than HIV; however, the resources to tackle this menace are still miniscule.

Dr. Shiv Sarin, Director, Institute of Liver and Biliary Sciences, New Delhi opened the discussion yesterday with a reminder that Hepatitis B & C infections are easily transmitted, particularly in health care settings, but with vaccines for Hepatitis B and treatment for Hepatitis C now available, the opportunity was ripe to take bold steps to control the problem of Hepatitis. He said: “We today have a very effective vaccine to prevent Hepatitis B. Every child should beprotected at birth with this vaccine. Similarly, infection control and safe injection practices will ensure that no more transmission on Hepatitis B or C takes place in health care settings. For those with Hepatitis C, new drugs today bring hope for complete cure. We need to make sure that treatment is made accessible to all those who need it.”

Dr. Samir Shah, Founder and Hon. General Secretary of National Liver Foundation was also present at the round table. He called attention to the growing numbers of people contracting Hepatitis B & C infections in India. Speaking at the event, he said “We need to get a handle on the Hepatitis Epidemic in India. A concerted national Hepatitis Control program needs to be launched at the earliest possible. We call on all state governments and our national leadership to take urgent actions.”

It is estimated that there are between 25 and 40 million people living with Hepatitis B or C viruses. These numbers are extrapolated from testing carried out in blood banks. In the absence of robust epidemiological work, these numbers remain uncertain. Nearly all Indians have been exposed to Hepatitis A virus and have experienced a mild form of illness in childhood. Addressing this will need a complete review of how India approaches water and sanitation issues, at public and personal levels.

Ms. Bhavna Visharia, a social activist from Mumbai, was a regular blood donor and organizer of blood donation camps. When it was found during her 17th donation that she had Hepatitis C, her situation changed dramatically. Today, she is healthy. She said: “The system of blood donation can save lives; it should be kept that way. We should ensure that life saving processes like blood donation and getting injections do not create a larger problem like Hepatitis for individuals and the society.”

Globally, around 150 million people are infected with hepatitis C virus (HCV). India contributes a large proportion of this HCV burden. The prevalence of HCV infection in India is estimated at between 0.5% and 1.5%. It is higher in the Northeastern part, tribal populations and Punjab, areas which may represent HCV hotspots, and is lower in western and eastern parts of the country. The predominant modes of HCV transmission in India are blood transfusion and unsafe therapeutic injections. There is a need for large field studies to better understand HCV epidemiology and identify high-prevalence areas, and to identify and spread awareness about the modes of transmission of this infection in an attempt to prevent disease transmission.

Viral Hepatitis is a silent pandemic that is affecting India. It is estimated that 25 million to 40 million Indians carry the Hepatitis B & C viruses (HBV and HCV). While these numbers dwarf the HIV epidemic in proportion, it is not a ‘burning issue’ that has caused public alarm or made significant headlines.

Global mortality figures due to infections related to Hepatitis is at par with that of Malaria, HIV and Tuberculosis, i.e.1.2 million deaths per year. The WHO India Hepatitis fact sheets put the prevalence of Hepatitis B as 4% and that of Hepatitis C as 1.2% in the general population.

While most Indians have been exposed to Hepatitis A in their childhoods that resulted in self-limiting illnesses, HBV and HCV infections can silently affect liver function over a long period of time before signs of the organ’s failure become apparent. HBV and HCV carriers are at the risk of liver failure or cancer, or both. The decades-long delay between HBV or HCV infection and the expression of chronic liver disease makes it difficult to link these diseases to earlier the infections. It has also been a major impediment in efforts to check the epidemic. Even during the infection’s silent phase, those exposed to the virus can actively transmit it to people around them.