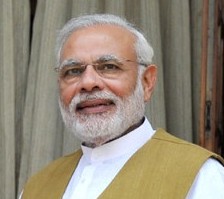 The prime minister also received greetings from people on the social networking site. People tweeted with the hashtag #HappyBdayPM, which was trending at the top in India.

“Greetings to Prime Minister Sh Narendra Modi ji on his birthday. My prayers for his health and long life,” Kejriwal tweeted.

“On behalf of whole of Gujarat and myself, I extend warm birthday greetings to our Prime Minister,” tweeted Gujarat Chief Minister Anandiben Patel.