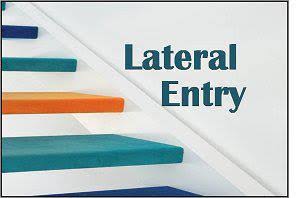 There are two reasons why the government has been keen on lateral entrants. One, to shake up the existing system, and second, the growing need for specialists. In its 2017 report, NITI Aayog noted that the rising complexity of modern day policymaking is increasingly shifting the pendulum in favour of domain specialisation instead of generalised competence of the IAS.

While many have criticised the entry of lateral entrants on the grounds that policymaking in a complicated country such as India needs more than just specialised talent, especially when the system puts a bigger premium on accountability than speed (and the lateral entrants don’t have that requisite administrative experience), there is nothing wrong in inducting new people into the system. If nothing else, they will bring in at least a new perspective in policymaking.

But if any political dispensation is really serious about improving the IAS, policymaking and governance, it has to go beyond the recruitment of lateral entrants and address other fundamental issues: how to give career bureaucrats chances to specialise and at what level; how to stop frequent transfers; how to improve the quality of lower-level bureaucracy that assists the senior officers, how to ensure that IAS officers also have industry experience, and, more importantly, how to shelter the officers from political interference. Without these changes, the experiment of lateral entries will just remain just that — an experiment.