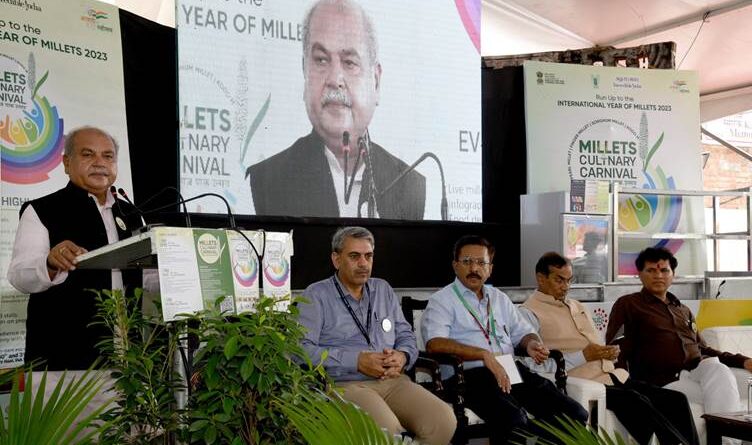 The Union Minister for Agriculture and Farmers Welfare, Shri Narendra Singh Tomar has said that nutritious grains should again get a respectable place in our food plate. On the initiative of the Prime Minister Shri Narendra Modi, the United Nations has declared the year 2023 as the International Year of Millets, under which the Group of Ministers has also been entrusted with the responsibility by the Prime Minister to promote nutri-cereals. Many programmes have been planned by the Central Government at the local, state, national and international levels.

Shri Tomar said this during his visit to the Millets Culinary Carnival at Dilli Haat today. Organized by the Union Ministry of Agriculture and Farmers Welfare, this culinary festival is a major step towards celebrating the International Year of Millets (IYoM) – 2023 under the stewardship of India, where the use of millets in various cuisines is being displayed during live cookery shows in which eminent chefs from different parts of the country have also participated.

With the least water consumption, low carbon footprint, and the fact that millets can be grown even during drought conditions, the millets are referred to as climate-friendly crops. Millet forms an alternative food system in an era of rising demand for vegetarian foods. Millet contributes to a balanced diet as well as a safe environment. These are the gifts of nature to mankind. Millets are a storehouse of micronutrients such as B-complex vitamins and minerals that are lacking.

Organized in association with ICAR-IIMR, IHM (Pusa) and IFCA, the chief guest at the festival, Shri Tomar said that millets should not be discarded by saying that it is the food of the poor, rather it should be publicized the world over like Yoga and Ayurveda, since they all are important from the point of view of health. India is a leading producer and consumer of millet crops and their products. “I look forward to many more such events to spread awareness about the consumption of millet and its health benefits,” said Shri Tomar.

Street play on Millets and Food Security was performed by the students of Institute of Hotel Management, Catering and Nutrition, Pusa. Shri Tomar also inspected various stalls of millets and distributed prizes. Out of 26 teams that vied for awards to the Best Culinary dishes made of Millets, five teams were shortlisted. IHM Indore, Chitkara University and ICI Noida bagged the top three places, while IHM Bhopal and IHM Mumbai also participated in the final round.

Through the festival, the general public is getting an opportunity to taste the nutritious-delicious dishes being made from millet. Information about nutrition is being provided during this festival at Dilli Haat. This is also a great opportunity to promote the nutritional benefits of millets, an opportunity for entrepreneurship and a regular diet plan for the general public, in which many startups and other stakeholders have participated. Various attractions of the festival include panel discussion on ‘Business Prospects for Small Scale Industries and Entrepreneurs’, street plays and quiz competitions through which the virtues of millet are being disseminated. The festival will continue till July 31.