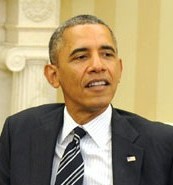 The executive order blocks certain transactions on property belonging to the North Korean government and to the ruling Workers’ Party of Korea.

The US Department of the Treasury also announced new sanctions on Pyongyang following Obama’s executive order. The sanctions are aimed at 17 government officials and organisations.

“These actions are consistent with our longstanding commitments to apply sustained pressure on the North Korean regime,” the White House said, adding “The US and the global community will not tolerate North Korea’s illicit nuclear and ballistic missile activities.”

Earlier this month, the UN Security Council unanimously adopted a resolution on tougher sanctions on North Korea to curb the country’s nuclear and missile programmes.

Security Council members also called for an early resumption of the Six-Party Talks.

The Six-Party Talks, a mechanism involving North Korea, South Korea, China, Japan, the US and Russia, is believed to be a practical way to realise denuclearisation on the Korean Peninsula.