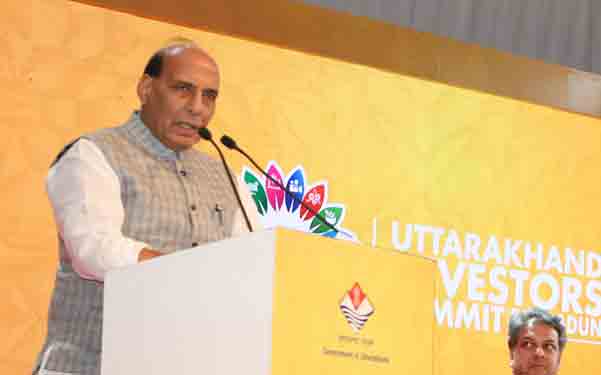 The Union Home Minister, Shri Rajnath Singh addressed the valedictory session of the Investors Summit in Dehradun, Uttarakhand  today. It was the concluding ceremony of the two-day event which has attracted 1,20,150 crore worth of pledges for investment in the hill state so far.

The Union Home Minister congratulated the Chief Minister of Uttarakhand for successfully organising the first ever such summit. He said that economic history of the state will recall this summit as an important first step. He pointed out that a strong economy is the backbone of any society and with this fact in mind the state of Uttarakhand was created to give fillip to the development in the backward regions of the state. He said that the presence of a stable government in the centre and in Uttarakhand has led to increased possibilities of development.

Shri Rajnath Singh further stated that security is a precondition for development and from this point of view Uttarakhand is an ideal destination for investment. He said that the scope of tourism, health & wellness industry was immense in the state. He praised the people of Uttarakhand for being large hearted and exhorted the investors to take benefit of the skilled labour force the state has to offer.

The Home Minister mentioned that the Home Ministry has worked out modalities to grant security clearance to set up business within 60 days. The length of this period has been just 53 days this year which is a major break from the past. He added that India is now one of the fastest growing economies in the world despite challenging global environment. This along with a credible government and structural reforms has led to preparation of groundwork for the New India of 2022. Given these factors,he appealed to the investors to fully participate in the growth story of Uttarakhand.

Speaking earlier the Chief Minister of Uttarakhand Shri Trivendra Singh Rawat informed the gathering that the pledges for investment had exceeded expectations and in more than 600 MoUs signed so far, an amount of 1,20,150 crores had been pledged.