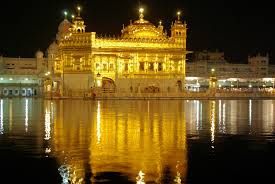 Vice President visits Golden Temple; calls it a “glowing symbol of the sublime spiritual tradition of our great Gurus”

Shri Dhankhar pays tribute to the martyrs of Jallianwala Bagh

Vice President concludes day-long tour to the state of Punjab

The Vice President, Shri Jagdeep Dhankhar today visited Sri Darbar Sahib (Golden Temple) at Amritsar and described it as “a glowing symbol of the sublime spiritual tradition of our great Gurus”.

Shri Dhankhar, who arrived in Amritsar on a day long tour, his first to the state of Punjab as the Vice President, termed “the peace, serenity, devotion and sense of service” at the Golden Temple as an “unforgettable experience.”

Noting down his remarks in the visitors book, he paid rich tributes to the Gurus and underscored that “Sri Harmandir Sahib has been emanating the message of love, humanity, compassion and brotherhood through ages.”

During his visit, the Vice President had langar at the Golden Temple and took part in Sewa along with his family members.

Thereafter, he visited the Jalliawalan Bagh and paid floral tribute to the martyrs. Calling it a memorial of national importance, he said that it “poignantly reminds of the sacrifice of martyrs to whom we are eternally indebted.” Shri Dhankhar also remarked that the best tribute to the martyrs is building “a prosperous, inclusive & self-reliant India they envisioned.”

Then the Vice President and his family had Darshan and performed Puja at Shri Durgiana temple and Shri Ram Tirath.

During the visit, the Vice President was accompanied by the Union Minister of State for Commerce & Industry, Shri Som Parkash, Punjab Minister of Transport, Shri Laljeet Singh Bhullar and other senior officials from the state.