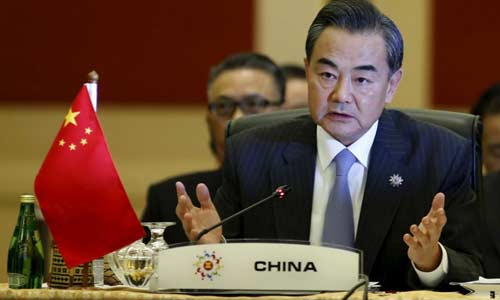 Chinese Foreign Minister Wang Yi’s message to India for maintaining border peace has been supplemented with fresh troop deployments to deter a confrontation in the Doklam area, says a Chinese blog.

Two postings in Xilu.com—an online publication covering Chinese military affairs — assert that Chinese troop presence has been permanently beefed up in the Doklam area, where Chinese and Indian troops were engaged in a 70-day standoff this summer.

The publication’s contributor Zhan Hao, underscores that during his visit to India earlier this month, Mr. Wang wanted “to remind India not to create problems and not to worsen the bilateral relations”.

Simultaneously, China has been positioning additional forces and building new infrastructure in the Doklam area. It is also strengthening rear support, in tune with China’s on-going military reforms.

The blog points point that’s China had first deployed “number 76 group in the [Doklam] plateau”. “As the standoff with India-China border progressed, number 77 group also came up to the plateau.” The posting added that, “It is obvious China has more than 20,000 to 30,000 troops in Tibet”.

It earlier quoted Indian media reports as saying that around 1600-1800 soldiers had been deployed in the Sikkim, Bhutan, Tibet border area.

China built two helicopter platforms, dozens of houses and stores, and upgraded roads to cope with the very severe winter.

“It is as if we are planting islands in the South China Sea. If Philippines provokes, then China will have very sufficient reason to build an island there,” the posting observed.

The emergence of a new base in the Doklam area will necessitate the construction of a “wide road in the rear”— a move that will have major implications for Bhutan.

“This road will not be just for military supply but also the pathway for Chinese and Bhutanese people. Simply put, in the future, the Bhutan people not need to connect to the world through India…”

“We will have [an] airport and railway station at Yadong County [in Tibet]. So this will be more convenient, compared with travelling through India.” Yodong is a town in Tibet’s Chumbi valley, only 34 km from the border crossing of Nathu La.

The posting highlighted that following fresh Chinese deployments, India was likely to scale down “provoking” China, though surveillance drone flights may continue. “In my perspective on one hand (India) will not provoke China as easily as last time. At the same time, they will not stop provoking, although unmanned aircraft crossing the border — this kind of thing, will happen again,” the blogger said, referring to the recent crash of an Indian drone on the Chinese side of the Line of Actual Control (LAC).

The write-up asserted that the flight of the unmanned aircraft was a reflection of India’s anxiety about China’s new deployments in the Doklam area.

The revival of the road construction, which triggered the Doklam standoff, could not be ruled out following the winter months, the posting warned. “First, the standoff in Doklam is having a pause.

Since winter is here, is spring far away? And when the spring comes, will china build the road again, and will India stop China again? And will China be so restrained? These are all unknown factors.”

The blog highlighted the vulnerability of the “Siliguri corridor” that connects the ethnically diverse northeast with the rest of India. It underscored that India’s northeast is an “agriculturally backward

region,” and would “immediately fall into chaos” if deprived of material supplies, passing through the Siliguri corridor, from the rest of India.