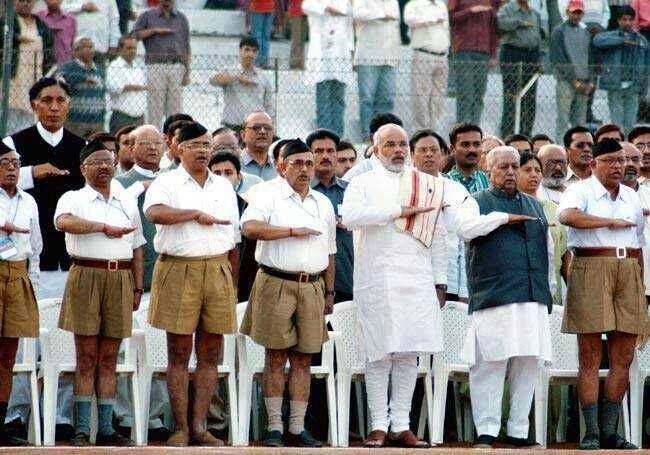 Without RSS (Rashtriya Swamsevak Sangh ) BJP couldn’t have come to power as RSS played a very vital role in bringing success and victory for the party.About RSS here is a brief introduction of RSS ideology,RSS ideology is based on the principle of selfless service to the nation.The RSS was founded in 1925 as an educational group to train Hindu men by character-building to unite the Hindu community to counter British colonialism in India, and suppress Muslim separatism.

Rashtriya Swamsevak Sangh upholds Indian Values and culture more than anything else.With numerous SWAMSEVAK’S across nation the ideology has spread rapidly and it was these swamsevaks effort which even today Prime Minister of India ,Narender Modi can’t ignore turned the tables around and brought a massive victory for BJP.

The RSS was set up as an alternative to the politics of mass anti-colonial struggle and has since formed militant wing Bajrang Dal.

It was banned by the British Rule and then thrice by the post-independence Indian government — first in 1948 when Nathuram Godse, a former RSS member, assassinated Mahatma Gandhi then during ,the emergency (1975–78); and after thedemolition of Babri Masjid  in 1992. The bans were subsequently lifted.

RSS was founded in 1925 by Keshav Baliram Hedgwar , who was a doctor in the city of Nagpur , British India.Hedgewar as a medical student inCalcutta  (now known as Kolkata) had been a part of the revolutionary activities of theAnushilan Samiti and Jugantar striving to free India from British rule

Mohan Bhagwat was chosen as the Sarsanghchalak of the RSS on 21 March 2009. He is one of the youngest leaders to head theRashtriya Swayamsevak Sangh  afterDr.K.B.Hedewar & M.S.Golwalkar

Organisations which are inspired by the Rashtriya Swayamsevak Sangh’s ideology refer themselves as the members of the Sangh Parivar  In most of the cases, pracharaks(full-time volunteers of the RSS) were deputed to start and manage these organisations. The organisations within the Sangh include theVishwa Hindu Parishad,Vanbandhu Parishad,Rashtriya Sevika Samiti,ABVP,Vanavasi Kalyan Ashram,Bhartiya Mazdoor Sangh,Vidya Bharati,Seva Bharati and many others spread in all parts of society. Numerous other Hindu organisations take inspiration from the RSS’s philosophy.