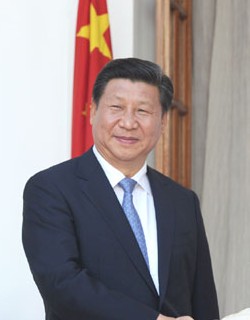 Beijing, April 4  Chinese President Xi Jinping’s meeting with US President Barack Obama has helped to alleviate tensions at a time when some countries have been playing up the South China Sea issue, Foreign Minister Wang Yi said.

The meeting, which took place on Thursday on the sidelines of the Nuclear Security Summit in Washington, was closely watched by the international community because many countries were pessimistic about the current state of Sino-US ties, China Daily quoted Wang as saying on Monday.

“The Americans have said that they will not take sides (in the South China Sea issue), so it should not be a problem for the China-US relationship,” Wang said.

The relationship should not be affected by historical problems between China and some US allies, and the positive dialogue between the two leaders has reassured the international community, he added.

During the 90-minute meeting, Xi and Obama discussed a range of issues, including economic policies, cooperation on nuclear security, maritime issues and the stability of the Korean peninsula.

The two leaders agreed to deepen cooperation and manage differences of opinion to expand common interests. It was the only bilateral meeting arranged by Obama’s team during the summit.

Xi acknowledged that China and the US have disputes and differing views on some subjects, and said both sides should respect each other’s concerns and seek solutions through dialogue.

“We are confident about the steady development of the China-US relationship this year, and that will continue smoothly into the next term (when a new president is elected in the US),” Wang said.

Climate change was once a stumbling block for Sino-US relations, but the two countries are now working together to bring the Paris Agreement on climate change issues into force as soon as possible. The two countries have also boosted cooperation on cyber-security issues, he said.

On Thursday, China and the US, two of the world’s leading nuclear powers, issued a joint statement about cooperation on nuclear security.

The two countries jointly built the Centre of Excellence on Nuclear Security in Beijing, the largest of its kind in the Asia-Pacific region, which opened in March.

Chen Kai, secretary-general of the China Arms Control and Disarmament Association, said the statement was very “inspiring” for maintaining global nuclear security, and would help the international community reach greater consensus on improving the handling of nuclear terrorism.