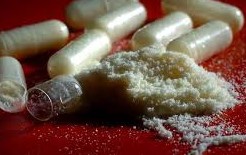 240 GMS. HEROINE RECOVERED FROM THE STOMACH OF AN AFGHANI NATIONAL WHO SWALLOWED THE SAME IN SMALL CAPSULES : INTERNATIONAL MARKET VALUE IS RS. 35 LACS (APPROX.)

On 20.9.15, an information was received at Police Station Lajpat Nagar from I.B.S. Hospital, Ring Road, Lajpat Nagar-III, New Delhi that one Abdul Majid Malekzada has been admitted in the hospital in a stage of unconsciousness and investigation revealed presence of some unknown substance in his stomach. Local police reached the hospital and from the passport of the patient, it was revealed that Abdul Majid Malekzada is a resident of Kabul, Afganistan. He was admitted in the hospital on 18.09.15 on the complaint of stomach pain. During treatment, the doctor noticed some unknown substance in his stomach. Initially, the patient was unfit for statement but even after gaining conscious, he did not disclose anything about the material inside his stomach.

On 23.09.15, the doctors from IBS hospital informed the local police of PS Lajpat Nagar that some capsules containing white powder have come out from the stomach of Abdul Mazid. On this information, SI Deepak Kumar along with staff reached the hospital and learnt that 34 capsules tightly wrapped in polythene were excreted out from his body. The capsules are containing white powder that appears to be Heroine. A team of experts from Narcotic Control Bureau, R.K. Puram was called at the spot and on testing the material, it was confirmed to be Heroine weighing about 240 gms. The price of the recovered drug in the international market is learnt to be around Rs. 35 Lacs. Subsequently, a case vide FIR No. 789/15 dated 23.09.15 u/s 21 NDPS Act has been registered at PS Lajpat Nagar.

Abdul Mazid is still hospitalized and is being quizzed about the source of these capsules that he had swallowed. He is also being questioned about his place of local residence in Delhi.

Further investigation will be taken up after his discharge from the hospital.
(MANDEEP S. RANDHAWA) IPS
DY. COMMISSIONER OF POLICE
SOUTH-EAST DISTT., NEW DELHI