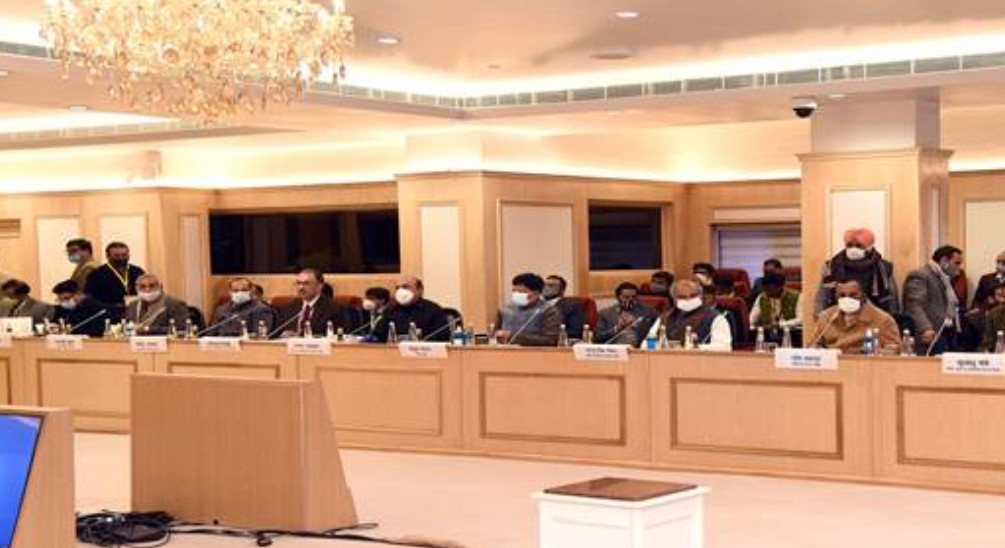 Next round of dialogue to be held on 4th January 2021

Both sides need to take steps forward to arrive at an amicable solution: Narendra Singh Tomar

Union Minister for Agriculture Shri Narendra Singh Tomar, Union Minister for Railways, Commerce and Industry and Consumer Affairs, Food and Public Distribution Shri Piyush Goyal and Union Minister of State for Commerce and Industry Shri Som Prakash participated in the 6th round of talks with the representatives of farmers’ Unions at Vigyan Bhawan, New Delhi today. Shri Tomar assured the Farmers’ Unions leaders that government is committed to solving farmers’ problems and both sides need to take steps forward to arrive at an amicable solution.

Shri Tomar assured the Farmers’ Unions that MSP and the Mandi system will continue like before. The demand of the Farmers’ Unions for an MSP law and the difference between MSP and market rates for agricultural produce would be referred to a committee when it is constituted.

On the Unions’ demand for the repeal of Farm Laws the Minister said that this too can be referred to a committee which will study the constitutional validityandpropriety keeping in mind the welfare of farmers.

Regarding the Air Quality Management Ordinance and the Electricity Amendment Bill Shri Tomar said that suggestions of the farmers’ unions have been agreed too in principle. Shri Tomar assured the farmers that government has an open mind and is willing to resolve all issues with clear intentions.

The talks proceeded in a cordial atmosphere and both sides agreed to continue dialogue. Agriculture Minister asked the Union leaders to put forward their proposals which the government will study and discuss. Agriculture Minister complimented the Farmers’ Unions for keeping the agitation disciplined and peaceful. He assured that the government is taking all possible steps for the welfare of farmers.

The next round of talks will take place on 4th of January 2021.  Agriculture Minister appealed to Farmers’ Unions to end the agitation so that women, children and elders can return home.