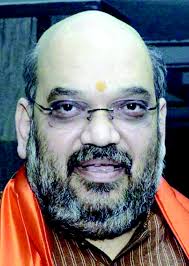 Mr. Shah, a close and controversial aide of Mr. Modi, was appointed to the top post in BJP at a meeting of Parliamentary Board where incumbent Rajnath Singh resigned after a tenure of one-and-a-half years.

Finance Minister Arun Jaitley, who had to table the pre-Budget Economic Survey in Lok Sabha, joined the press conference where the announcement was made by Mr. Singh before all these leaders.

“From now and now on, Amit Shah will be the president of the BJP and lead the party. His appointment was asp proved unanimously,” he said flanked by Mr. Modi and other leaders.

Shortly after the announcement, Mr. Modi and Mr. Singh offered sweets to Shah while other leaders including Advani, Joshi, Swaraj and Jaitley gave him bouquets.

As reporters started plying him questions, Mr. Shah replied “I will speak later” bringing the brief ceremony to a close.