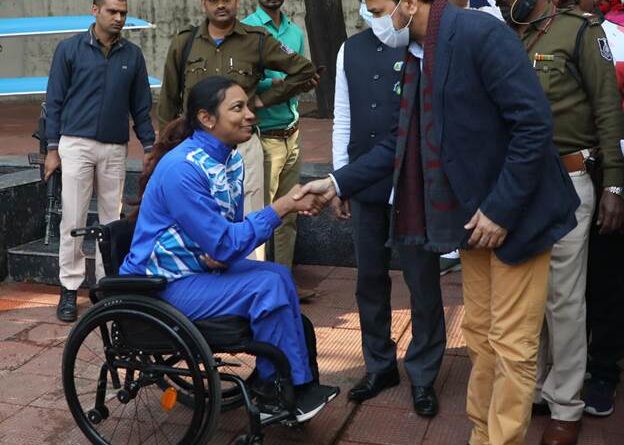 Union Minister of Youth Affairs and Sports Shri Anurag Singh Thakur paid a visit to the Sports Authority of India National Centre of Excellence in Bhopal on Monday and interacted with athletes as well as took a tour of the various facilities in the centre. The visit took place  ahead of the  launch of the logo of  Khelo India Youth Games to be held in  Madhya Pradesh.

“What the Sports Authority of India is doing to maintain close to 100 acres big centres and campuses is also noteworthy. I congratulate the authorities who do so many programs as well for athletes, coaches, support staff and so on”, Shri Thakur mentioned.

Earlier in the day Union Minister visited the para canoeing facility in the state and was accompanied by Smt Yashodhara Raje Scindia, Minister of Sports and Youth Welfare, MP, as well as other officials from the Madhya Pradesh government. They interacted with a few athletes, including para-Canoeist Prachi Yadav, who scripted history by becoming the first Indian to win a medal (bronze) at the Paracanoe World Cup in Poland earlier this year.

Commenting on the sports infrastructure available across the State, the Union Minister added, “Bhopal has one of the best shooting and equestrian ranges. It is close to world class. The State of MP is also prepared very much for the Khelo India Youth Games.”

“MP is slowly becoming a hub of  sports in India . I wish if all other States and UTs follow the example , India will become a sporting superpower soon”, he added.