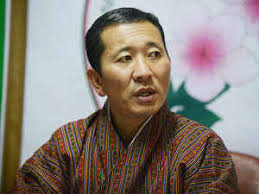 New Delhi, Dec 24  Bhutan Prime Minister Lotay Tshering will be coming here on a three-day visit from December 27 in what will be his first state visit to India after asuming office in November, it was announced on Monday.

According to a statement issued by the Ministry of External Affairs, Tshering will be accompanied by Bhutanese Minister of Foreign Affairs, Minister of Economic Affairs and other senior officials.

“India and Bhutan enjoy exemplary ties of friendship and cooperation, based on utmost trust, goodwill and mutual understanding at all levels,” the ministry statement said.

“The upcoming visit of Prime Minister Lotay Tshering will provide an opportunity to the two sides to review the progress in our multifaceted partnership and to discuss ways and means to expand the enduring ties of friendship and cooperation for the benefit of the two peoples,” it added.

During the course of his visit, taking place during the golden jubilee year of the establishment of formal diplomatic ties between India and Bhutan, Tshering, besides calling on President Ram Nath Kovind and Vice President M. Venkaiah Naidu, would also hold bilateral talks with Prime Minister Narendra Modi.

External Affairs Minister Sushma Swaraj and other ministers of the Union Cabinet would also call on the visiting dignitary.

Tshering’s Druk Nyamrup Tshogpa (DNT) party, formed in 2013, won 30 of the 47 National Assembly seats in the elections in the Himalayan kingdom held in October.

The country of 800,000 people, located between India and China, has chosen a different party to rule at each election since the end of absolute monarchy in 2008.

India is a leading development aid partner for Bhutan. There are a number of institutional mechanisms between India and Bhutan in areas like security, border management, trade, economy, hydroelectricity, development cooperation and water resources.

New Delhi has set up three hydroelectric projects in Bhutan with a total capacity of 1,416 MW, which are operational. About three-fourth of the power generated is exported to India and the rest is used for domestic consumption.