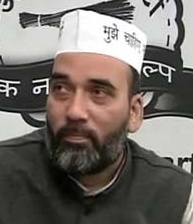 In the meeting, Gopal Rai assured Taxi Union that there will be no harm to their livelihood from the newly-introduced “City Taxi” Service. He said that City Taxi scheme will benefit unemployed people of  the capital.

The Transport Minister also said that for the welfare of Auto Drivers and to remove corruption , Burari Transport Authority will be developed as model authority. Transport Department has decided to develop Burari transport authority by increasing numbers of seats along with setting up of central control room and installation of CCTV cameras. We have also decided to build first-aid clinic inside the Burari Authority. Besides, help desks with sufficient staff will also be installed. Staff deployed at counters will not be allowed to use mobile phones,” Rai added.

Transport minister has asked the Traffic Police to not challan auto drivers for parking their vehicles around ‘Halt & Go” stand.