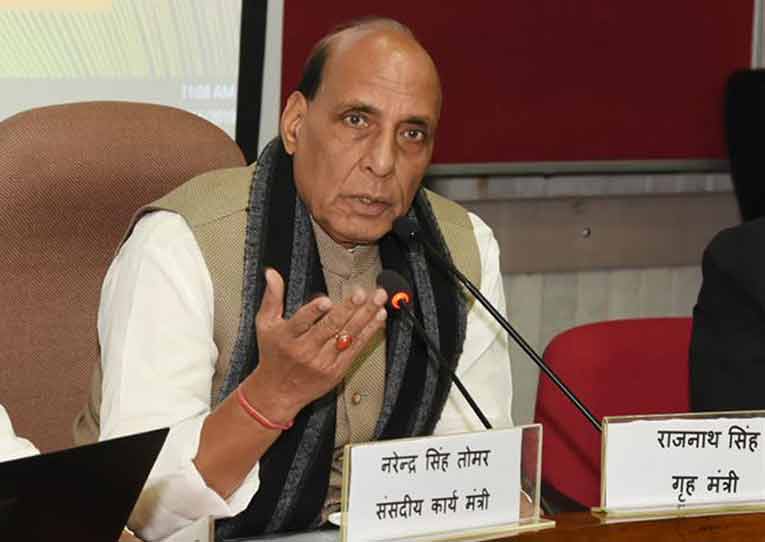 New Delhi,
The Union Home Minister Rajnath Singh chaired a meeting of floor leaders of political parties in both the houses of parliament, here today in the wake of Thursday’s Pulwama attack. The Union Home Minister briefed them about his visit to Srinagar yesterday and said that the morale of the Security Forces is high and they expressed resolve to continue the fight against terrorism till its logical conclusion. He said the Government has given a freehand to the Security Forces to deal with terrorists and their perpetrators. The Government has followed a policy of zero tolerance against terrorism from the beginning. The 14th February cowardly attack reflects this very desperation among terrorists.

Shri Rajnath Singh said a vast majority of people of Jammu and Kashmir are peace loving but there are certain elements in the state who are in league with the terrorist groups operating from across the border.

The Union Home Minister said the sacrifices made by our Security Forces will not go in vain and the country is united in its fight against terrorism. The government is determined to root out terrorism from our soil, he added. Shri Rajnath Singh said this meeting has sent a message to the global community that the country, from Kashmir to Kanyakumari, speaks in one voice on matters of national interest.

The floor leaders of all political leaders also spoke and extended their support to the government. Later, they unanimously adopted a resolution. The text of the resolution is as follows:

“We strongly condemn the dastardly terror act of 14thFebruary 2019 at Pulwama in Jammu and Kashmir in which lives of 40 brave jawans of CRPF were lost. We, along with all our countrymen, stand with their families in this hour of grief.

We condemn terrorism in all forms and the support being given to it from across the border.

India has during the past three decades faced the menace of cross border terrorism. Of late, terrorism in India is being actively encouraged by the forces across the border. India has displayed both firmness and resilience in dealing with these challenges. The entire nation speaks in one voice to express its determination to fight these challenges. Today, we stand united in solidarity with our Security Forces in fighting terrorism and in defending the unity and integrity of India.”