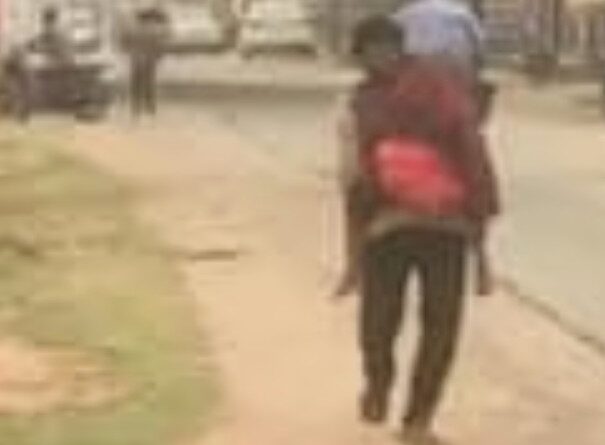 Ambikapur, Mar 26 : A video of a man carrying the body of his seven-year-old daughter on his shoulders in Chhattisgarh’s Surguja district went viral on social media on Friday,prompting health minister TS Singh Deo to order a probe.

According to officials, the girl died on Friday morning at the Community Health Centre at Lakhanpur village in the district, and her father took the body away before a hearse arrived.

Ishwar Das, a native of Amdala village, had brought his ailing daughter Surekha to Lakhanpur CHC early in the morning, they said.

“The girl’s oxygen level was very low, around 60. According to her parents she was suffering from high fever for the last few days. Necessary treatment was initiated but her condition deteriorated and she died around 7:30 am,” said Dr Vinod Bhargav, Rural Medical Assistant (RMA) posted at the health centre.

“We told the family members that a hearse will arrive soon. It came around 9:20 am, but by then they had left with the body,” he added.

In the video, the man can be seen carrying the body on his shoulders. He covered a distance of around 10 km on foot to reach home in Amdala.

After the video went viral on social media, Health Minister Singh Deo, who was in Ambikapur – the district’s headquarters on Friday, asked the district’s Chief Medical and Health Officer to probe the matter and take necessary action.

“I saw the video. It was disturbing. I have told the CMHO to take appropriate action after getting the matter probed. I have told him that those who are posted there but are not able to discharge their duties should be removed,” the minister told reporters.