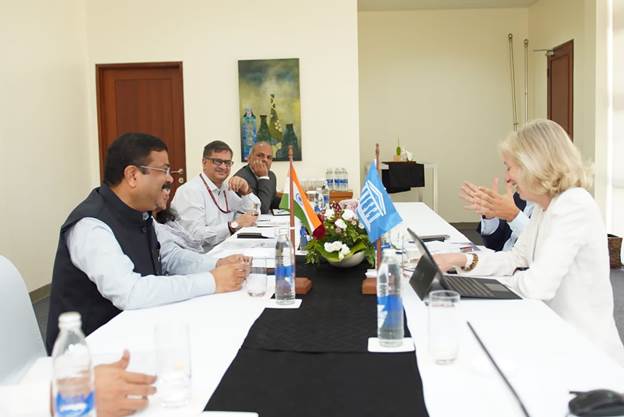 Dharmendra Pradhan holds a series of meetings in Bali, Indonesia.

Shri Dharmendra Pradhan calls for strengthening cooperation in education and skilling in bilateral meetings with Australia and Indonesia.

Shri Pradhan had meaningful dialogues with Ms Stefania Giannini, ADG, UNESCO on furthering the Education 2030 agenda. He also, discussed UNESCO’s support for promoting language-based education and for the upcoming G20 under India’s presidency.

The Ministers had fruitful discussions on further expanding the academic and skill development partnerships and also realising the full potential of Comprehensive Strategic Partnership between Indonesia and India.

Both the leaders explored opportunities for collaborations in education and skilling, especially in the areas of curriculum design, student exchange and research.

Later, Shri Pradhan congratulated HE Nadeim & Indonesia for organising a successful EdWG and Education Ministers’ Meeting under the G20 framework. Shri Pradhan also appreciated his support for India and his keenness to collaborate with education and skill sectors of India. He also invited him to India.

The Ministers had productive conversations towards deepening engagements in the field of early childhood and school education between both the countries.

Later, Shri Pradhan said that India and Australia enjoy vibrant cooperation in higher education, research and skill development. Intensified engagements in early childhood and school education will create a strong base for providing life-long learning opportunities to children in both our countries.